Facebook Is Bringing 360-Degree Videos To Your News Feed 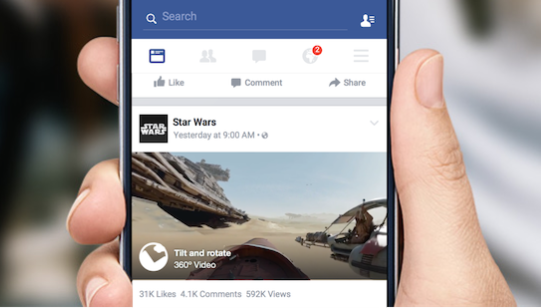 The Star Wars Episode VII: Force Awakens video lets viewers speed the giant fallen Imperial Super Star Destroyer, while Vice‘s takes viewers to current-day Afghanistan. Both contain environments that play just as important a role as the subject of the videos themselves. As virtual reality becomes more prominent in our everyday lives, we may see 360 videos play a larger part in consuming media on the web.

With 360-degree video, Facebook users are able to put themselves in the center of the action. On a desktop computer, you can click around the video with your cursor. On mobile, you can move your phone in real space to shift perspective in the video, or drag the onscreen footage with your finger. With your phone or computer acting as a makeshift viewfinder, the solution is more affordable than investing in full-on virtual reality hardware like the upcoming Oculus Rift.

Facebook’s 360 video in the timeline may not convince users to go out and buy a Gear VR or other similar headset. But those who already own a virtual reality headset like the Playstation VR or Oculus Rift can load up Facebook for the effect on certain videos. And with all Facebook users able to upload 360 video — not just brands — we may soon see an influx of moveable video content.

Videos that support the immersive video format are marked with a 360 video logo. Those interested in the nitty gritty specs can find Facebook’s officially supported formats here. The videos that enable you to pan around can be had currently only on Android and desktop. iOS support of Facebook’s 360 degree videos will arrive later on.

You can zip around a Super Star Destroyer in the Star Wars 360 video below:

Speed across the Jakku desert from Star Wars: The Force Awakens with this immersive 360 experience created exclusively for Facebook.