Lopsided Supernovas, A Ferrari For The Sky, And Other Amazing Images Of The Week

Plus, the first-ever image of thunder 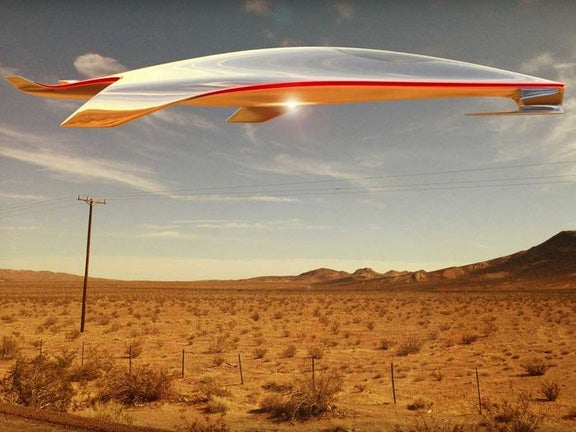 When he's not designing Ferraris, apparently Flavio Manzoni spends his free time designing spaceships. "I tried to imagine something that can fly in the future, since there will be less and less space available on the ground," he tells Form Trends. Manzoni says his inspiration came from a childhood fascination with aliens. "I lived in a six-story building, with a large terrace at the top. I thought that one day a UFO would land there," he says. "It disturbed me a little, but I was curious.". Ferrari/Flavio Manzoni
SHARE 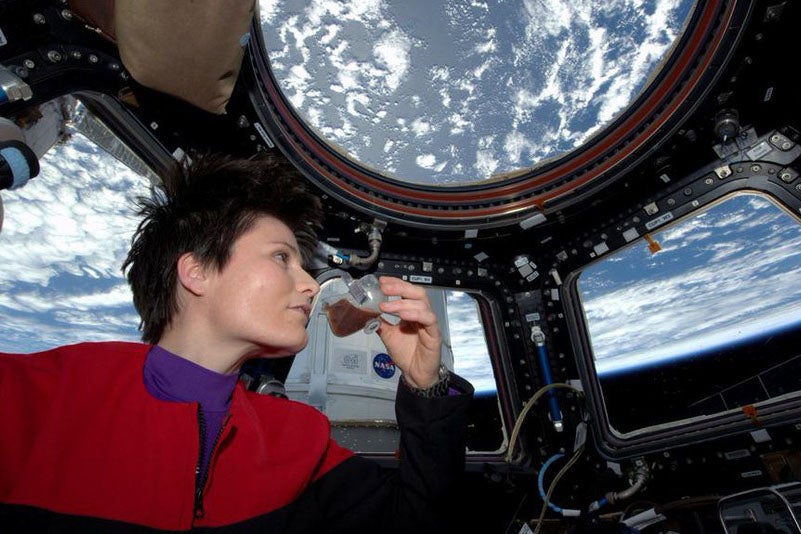 The Perfect Cup of ISSpresso

On Sunday, Italian astronaut Samantha Cristoforetti posted a picture of herself drinking a cup of espresso in space, with this Star Trek-inspired caption: “Fresh espresso in the new Zero-G cup! To boldly brew.” The International Space Station’s new espresso machine is called the ISSpresso, and it can also brew tea, broth, or other hot liquids in a zero-g cup–a huge improvement over the usual drinking pouch with a straw.

The Sports Car Of The Sky

When he’s not designing Ferraris, apparently Flavio Manzoni spends his free time designing spaceships. “I tried to imagine something that can fly in the future, since there will be less and less space available on the ground,” he tells Form Trends. Manzoni says his inspiration came from a childhood fascination with aliens. “I lived in a six-story building, with a large terrace at the top. I thought that one day a UFO would land there,” he says. “It disturbed me a little, but I was curious.” 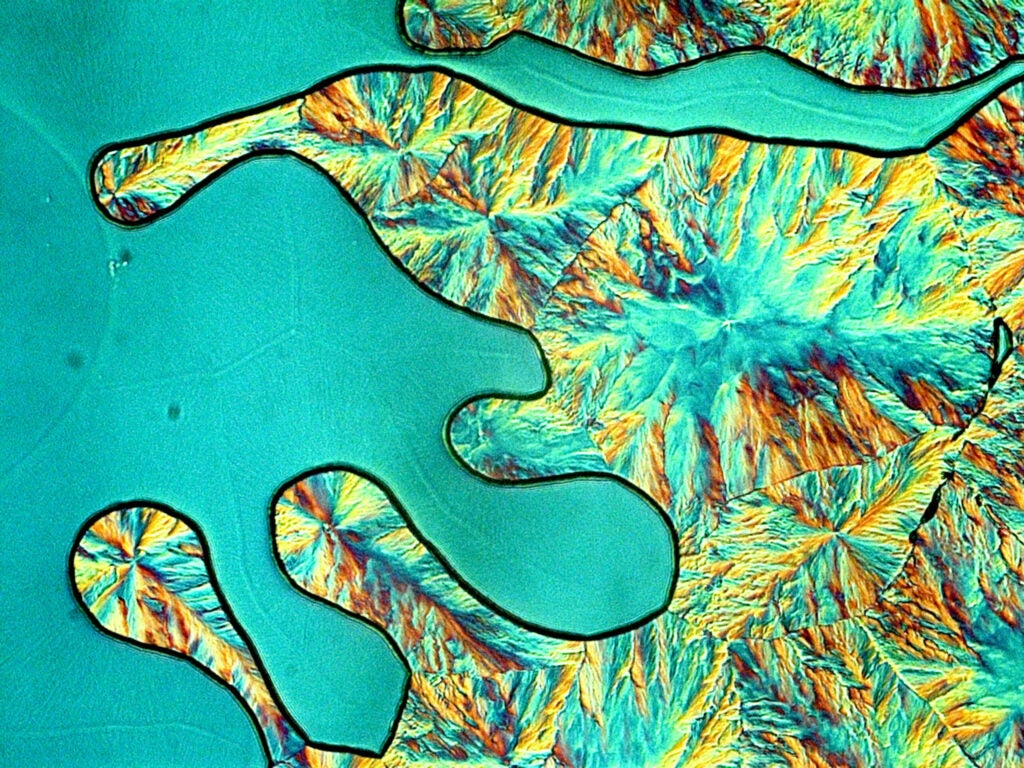 The Cold Never Bothered Us Anyway

“Frozen Landscape” might look like a scene from Elsa’s ice palace, but it’s actually a thin layer of wax between two glass slides, illuminated with linearly polarized light. Optics researcher Aongus McCarthy of Heriot-Watt University created the image. Originally submitted to a 2014 photo contest, the image made its way around the Internet again this week. 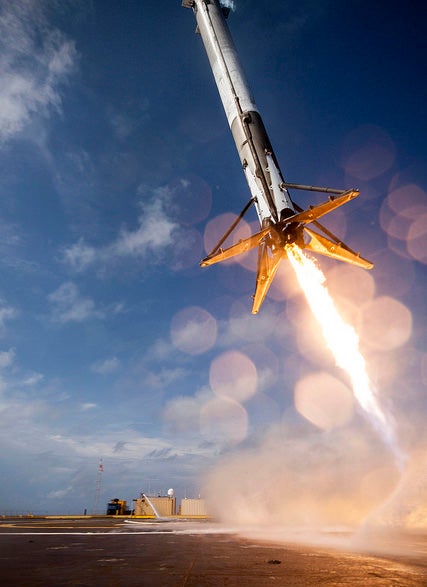 So Close, And Yet So Far

This high-resolution image of SpaceX’s Falcon 9 shows a different angle of the landing–and how incredibly close they were to landing successfully. Last month, the rocket landed on a drone ship in the Atlantic Ocean, but then tipped over at the last second. You’ll get ’em next time, SpaceX! 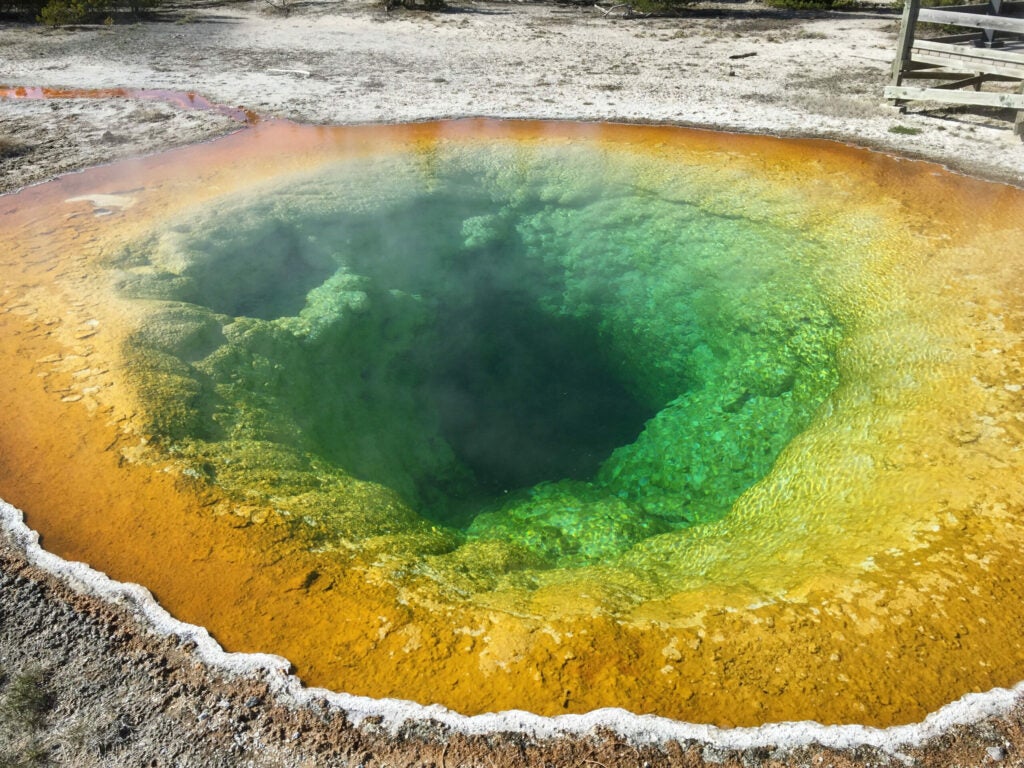 Microbiologist Alex Berezow snapped this photo of the Yellowstone’s Morning Glory Pool. The hot spring was so-named because of its resemblance to morning glory flowers–before the 1960s, this pool was “filled with water of the loveliest, clearest, robin’s egg blue,” according to park literature. Though still gorgeous, this drastic color change is unfortunately the result of tourists throwing trash into it, which caused bacteria to bloom. Yellowstone officials have since cracked down on visitors wielding lucky pennies. 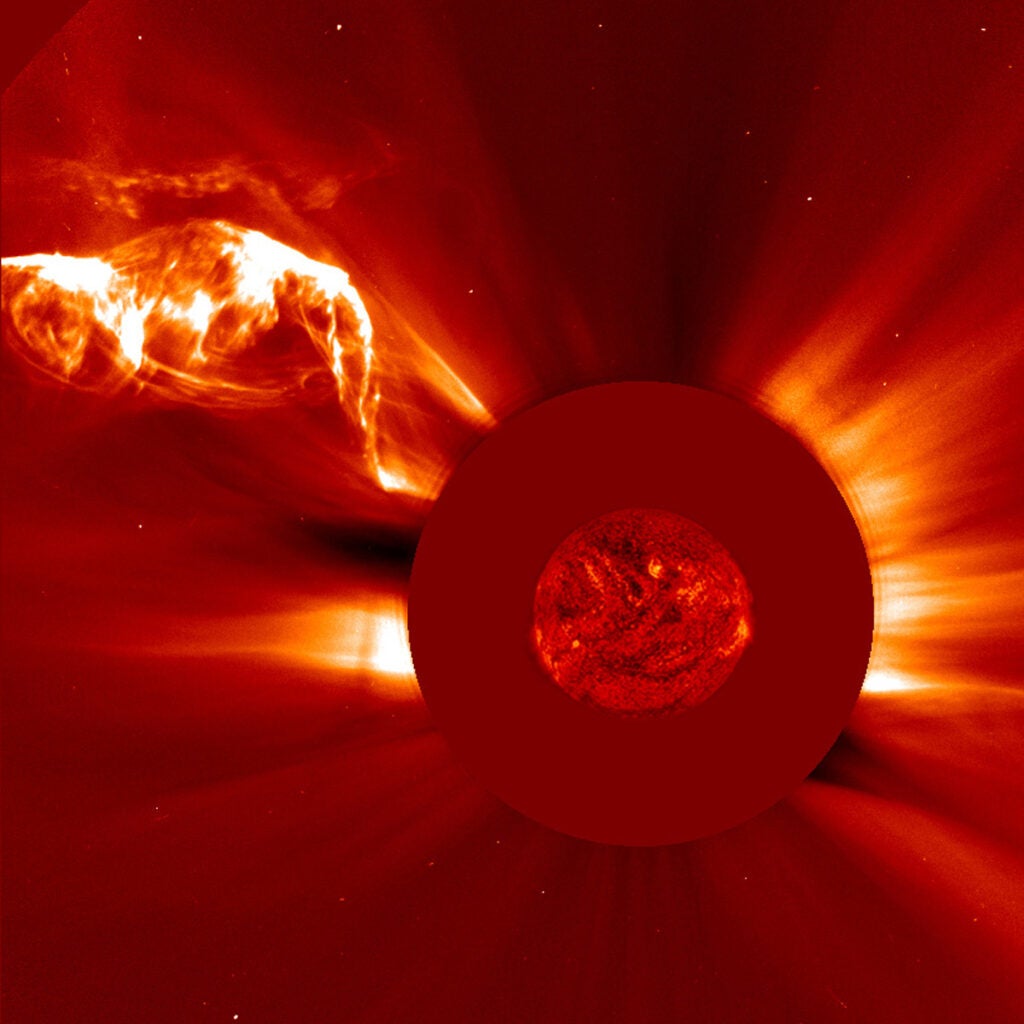 In late April, a long filament in the Sun erupted into a large burst of bright plasma. A solar filament is an unstable strand of solar material suspended above the Sun because of magnetic forces, and this one is unusually long–it extends almost half the length of the sun’s visible hemisphere, in fact. This image was taken by a coronagraph instrument, which creates an artificial eclipse by blocking the light from the sun with an occulter disk. You can see the eclipse at the center, as well as the coronal mass ejection in the upper left corner. 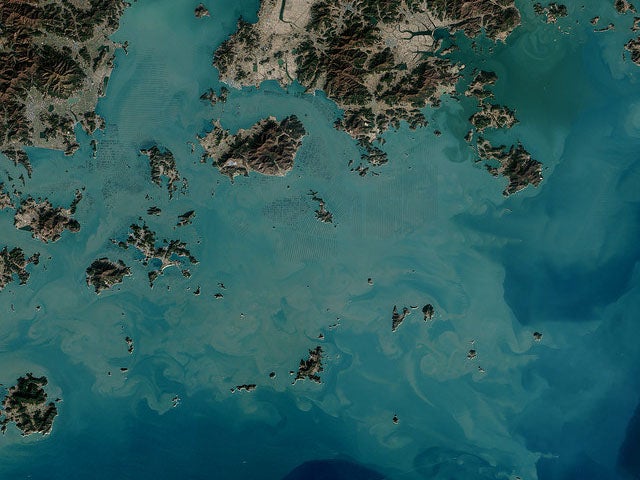 This beautiful view of South Korea shows the fields of seaweed that grow off the country’s southern coast. NASA explains that the checkerboard of dark squares is seaweed grown on ropes, which are held near the surface with buoys. This ensures the seaweed stays close to the surface and gets enough light during high tide, and it prevents the seaweed from hitting the bottom during low tide. These floating algae eventually become snacks, as seaweed is an ingredient in many traditional Korean, Japanese, and Chinese foods. 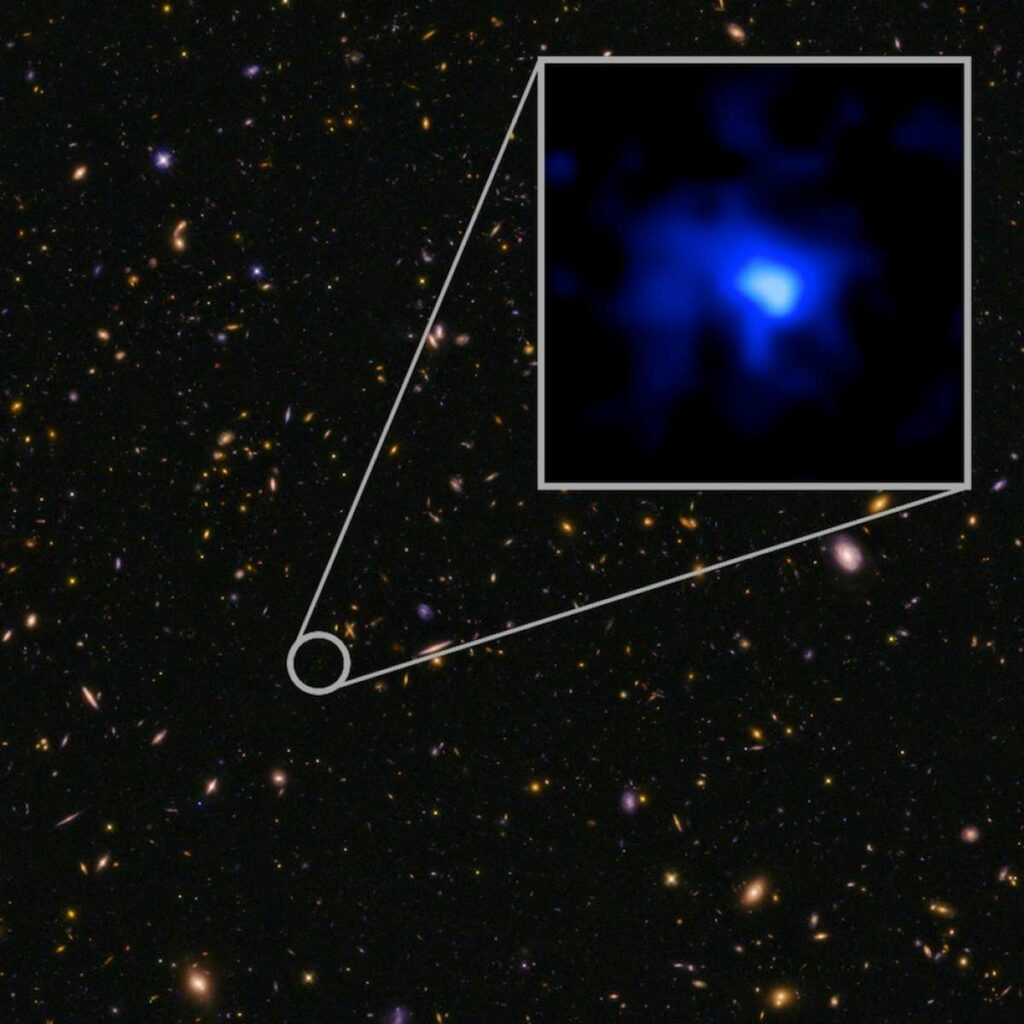 A Galaxy Far, Far Away

You’re looking at a picture of the farthest galaxy ever found. More than 13 billion light-years from Earth, the galaxy EGS-zs8-1 holds a very bright group of stars. Scientists originally identified it from Hubble and Spitzer images, but recent research pinpointed the exact location of the star cluster using Hawaii’s Keck Observatory. Perhaps in EGS-zs8-1, on a remote desert planet orbiting two suns, a young Padawan is contemplating his destiny. 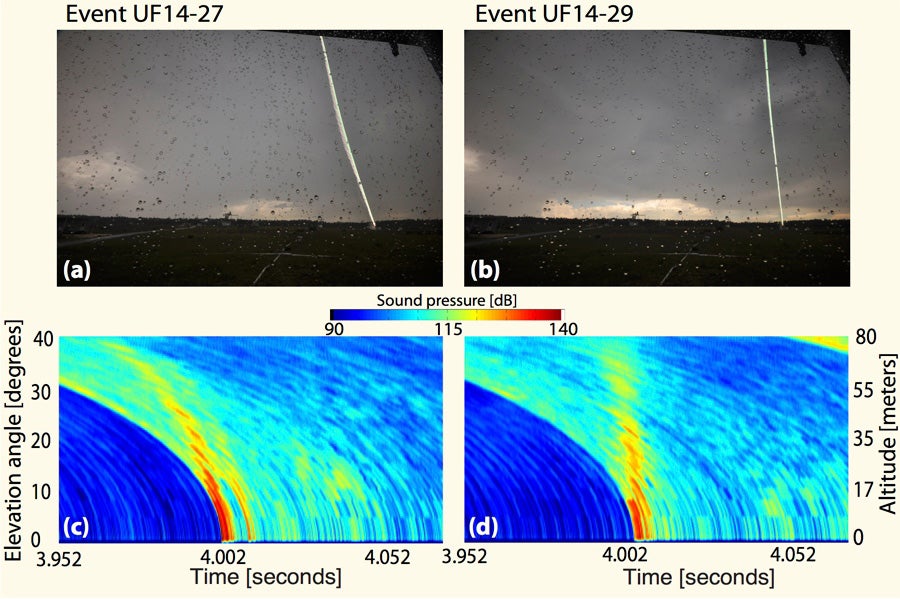 For the first time, scientists have produced the first-ever high-resolution images of thunder. Atmospheric scientist Maher Dayeh produced these acoustic maps by firing a rocket with a trailing copper wire into a cloud during a storm. This triggered lightning, and Dayeh and his team recorded the accompanying thunder with 15 microphones. These maps reveal how much energy radiated off the bolt as it struck the ground, with warmer colors indicating louder sound waves. This could help scientists better understand lightning, which Dayeh says strikes our planet more than 4 million times each day. 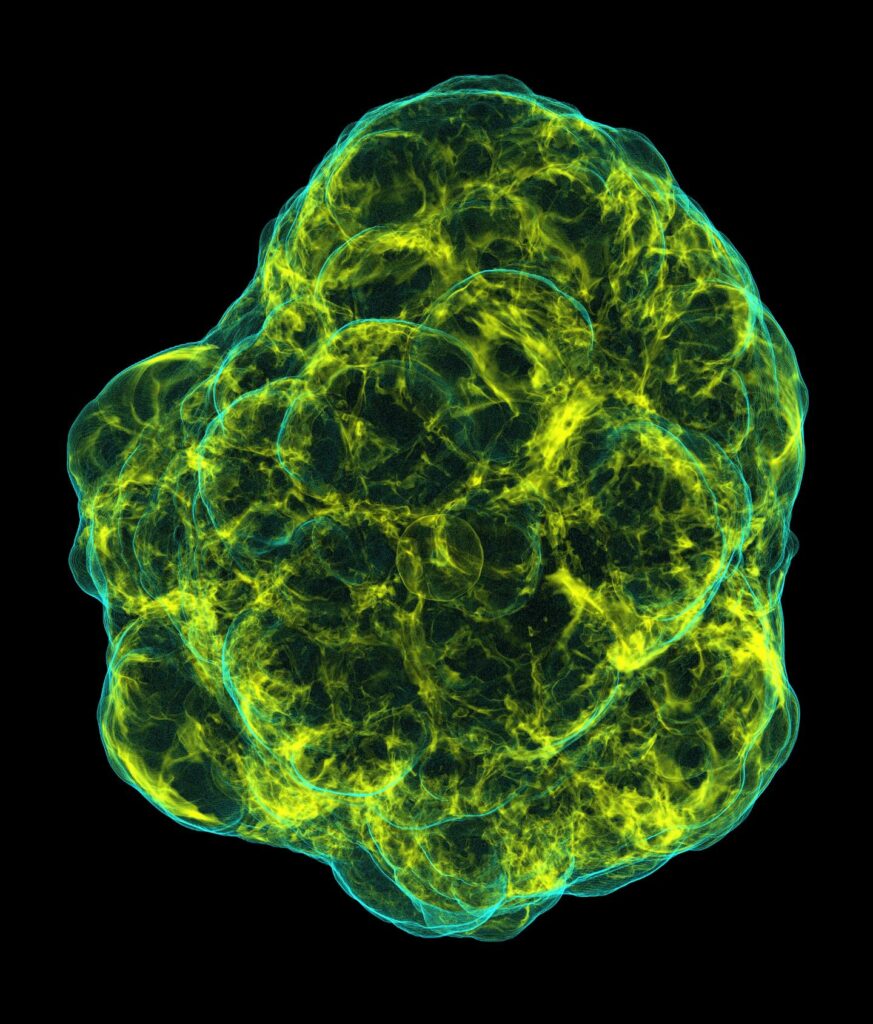 When observing the demise of supernova 1987A, scientists made an important discovery about cosmic deaths: they are lopsided. “It turns out you need asymmetries to make the star explode,” says principal investigator Fiona Harrison. NASA’s Nuclear Spectroscopic Telescope Array (NuSTAR) detected the energy signature of titanium-44, a radioactive version of titanium that indicates a star is on the brink of explosion. Harrison and her team analyzed the Doppler shifts, or direction-dependent frequency changes, of energy from titanium-44, and their findings showed that most material moved away from NuSTAR. In other words, star explosions are messy affairs that involve debris hurtling off in different directions.
Private Space Flight
Space
Space X
espresso
ferrari
galaxy
images of the week
IOTW