What it really means for a wildfire to be ‘contained’

It's not about putting out all the flames. 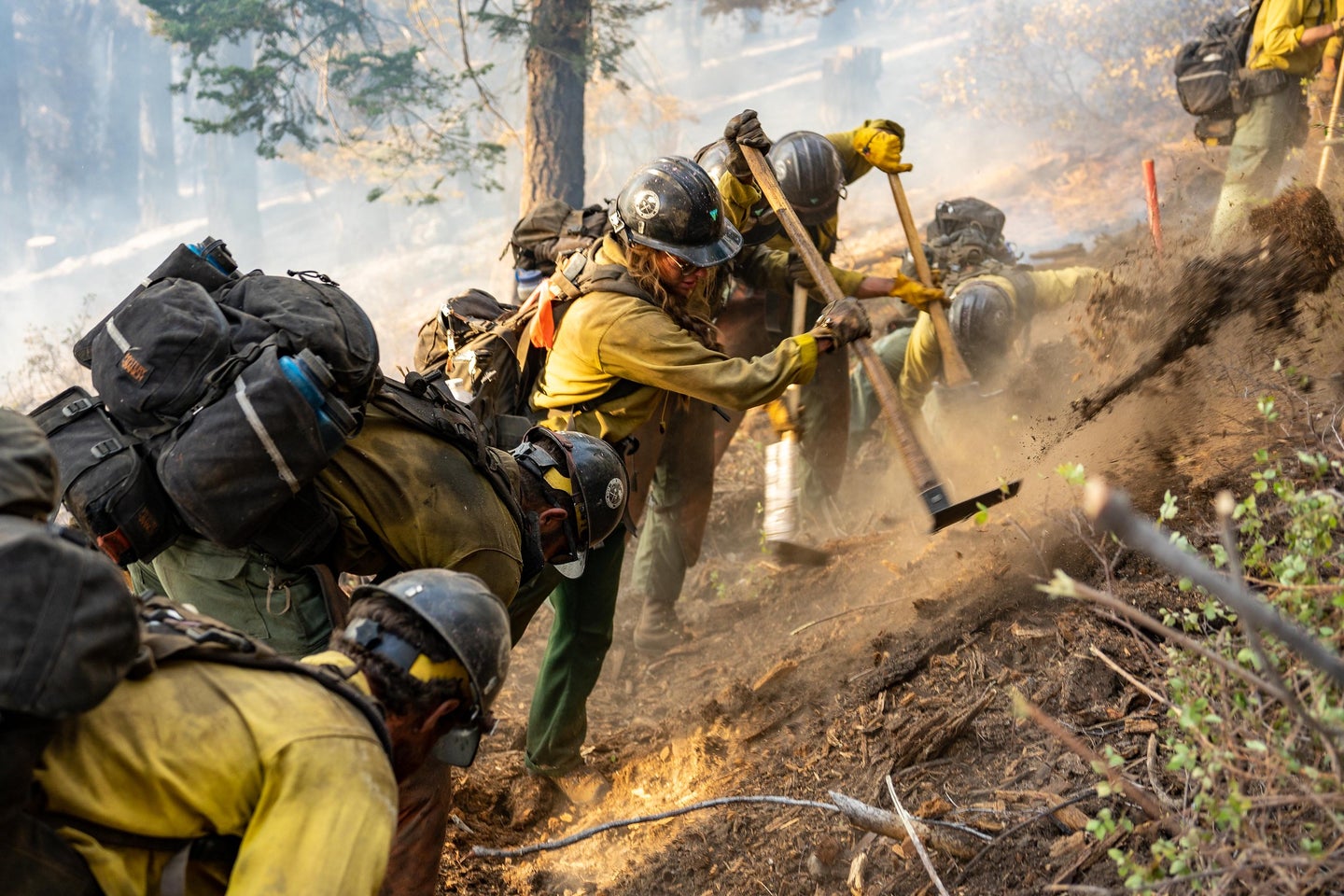 As you follow wildfires in your state and around the country this summer, you’re likely to see progress against fires reported with a single statistic: “percent contained.”

Watching the number change over the course of a fire can give you a sense of how the emergency response is going. Still, it’s not always clear what containment means. A fire can remain mostly, but not entirely, contained for weeks—or it can spread in bad conditions, causing the containment percentage to fall.

[Related: A network of 1,000 cameras is watching for Western wildfires—and you can, too]

Popular Science spoke to Sean Triplett, the tools and technology lead at the National Interagency Fire Center, which coordinates wildfire responses across the country, to break down the key statistic.

What does wildfire containment mean exactly?

On a basic level, containment means that firefighters have surrounded the outer perimeter of the flames with a combination of firebreaks, non-flammable areas, and already burned land. It’s not that the fire is out, or even necessarily that the danger has fully gone away. It’s just that it’s unlikely to move past the containment line.

Percent contained measures how much of the perimeter is still burning freely, and how much of it is hemmed in. It most often applies to fires that have been burning for more than a few days—and that involve a higher-priority response. During the initial round of firefighting, Triplett says, the blaze can grow so quickly and unpredictably that “you don’t want to have that kind of estimate until you have a handle on what the fire is doing.”

Containment is part of a larger plan for managing a wildfire. Oftentimes, says Triplett, fire managers work to keep the flames inside of an “operational box” to prevent it from running into homes, infrastructure, or critical watersheds. For example, a fire can be only 50 percent contained, but not pose an immediate threat to the public.

What counts as contained?

The containment ring around the fire can take many different shapes depending on both the terrain and the weather.

“100-percent containment could imply that [fire crews] were tasked to get a line all the way around the fire,” Triplett says—but it could also mean hemming in a fire against the existing landscape, like lakes, rock faces, and even already-burned areas. “Basically what constitutes a line is getting down to mineral soil, or some type of environmental factor that would prevent further burning,” he explains.

But containment is as much about confidence in the line as its physical properties. In general, the fireline only counts towards containment if “[operations managers] are comfortable that the fire … is not going to jump across the line,” Triplett says.

Firefighters can clear brush with chainsaws and remove any flammable vegetation with shovels and adzes, or, in easier-to-access terrain, they can bring in bulldozers and huge logging machines that can cut a gap in forest.

Tools like water tankers and flame retardants are mostly used to support the building of the containment, Triplett says. They can’t stop a fire, but they can cool it down to the point that a crew can get in close to start cutting firebreak, cutting off its fuel supply.

In some cases, crews reinforce those lines by setting intentional burns inside the containment area. Triplett stresses that this requires lots of prep work—it’s not just setting a fire and watching it rip. First, a crew has to build a reliable fireline. Then they set flames along the break and well within the interior. “As that fire inside the line begins to gain momentum,” it pulls the entire controlled burn deeper inside, towards the wildfire, Triplett says. Then, “when the main firehead hits that area, it basically runs out of fuel.”

Sometimes, Triplett notes, the goal is to strengthen the boundary until there’s “no heat detected within 100 feet, 300 feet, or even further from the line.” After a fire has passed, they’ll check the boundary by walking into the ashes and testing it with their hands.

The key to prepping the containment line is predicting what kind of fire conditions it’ll have to withstand. Incident response teams, Triplett says, rely on long-term weather data and climate models to make those calls, incorporating everything from expected rainfall to historical wind patterns over a given month.

How is it measured?

Firefighters on the ground are constantly sending progress reports back to the incident’s central command. Mappers record those details as the fireline is constructed, inspected, or reinforced to incrementally add to the containment percentage.

The maps also incorporate data from planes or drones equipped with infrared sensors, which detect spot fires or smoldering areas. “Those can detect very small areas of heat just around the temperature of ignition of woody material,” Triplett says. They can also record fires that aren’t raging just yet.

Those reports can push containment the other direction as well. “You could have 40 percent one day,” Triplett says, “and then the fire makes a run, and that grows your uncontained area.”

But the immediacy of data helps in any situation, and has transformed wildfire response over the past two decades, he says. When Triplett first started mapping fires in 2000, everything was done by hand. “It was mylar and dry erase markers,” he recalls.

That changed around 2014, when firefighters started to use smartphones to record the progress of containment as they built lines and worked on other maneuvers. The system isn’t perfect, however: Wildland fires are often out of cell service, and a firefighter needs to travel to an area where they have LTE coverage to sync up with the central map.

But even a few bars make a big difference, both for the containment crew and the people in the path of a fire. “We went from knowing what the fire was doing maybe once every 24 hours, to where we are now,” Triplett says. “I hate to use the term ‘real time,’ because we’re not there. But we’re getting closer to having an appreciation of what the fire is doing in a dynamic environment.”