Fossils pulled from the quarry of an ancient Maya city reveal the dawn of reef fishes. 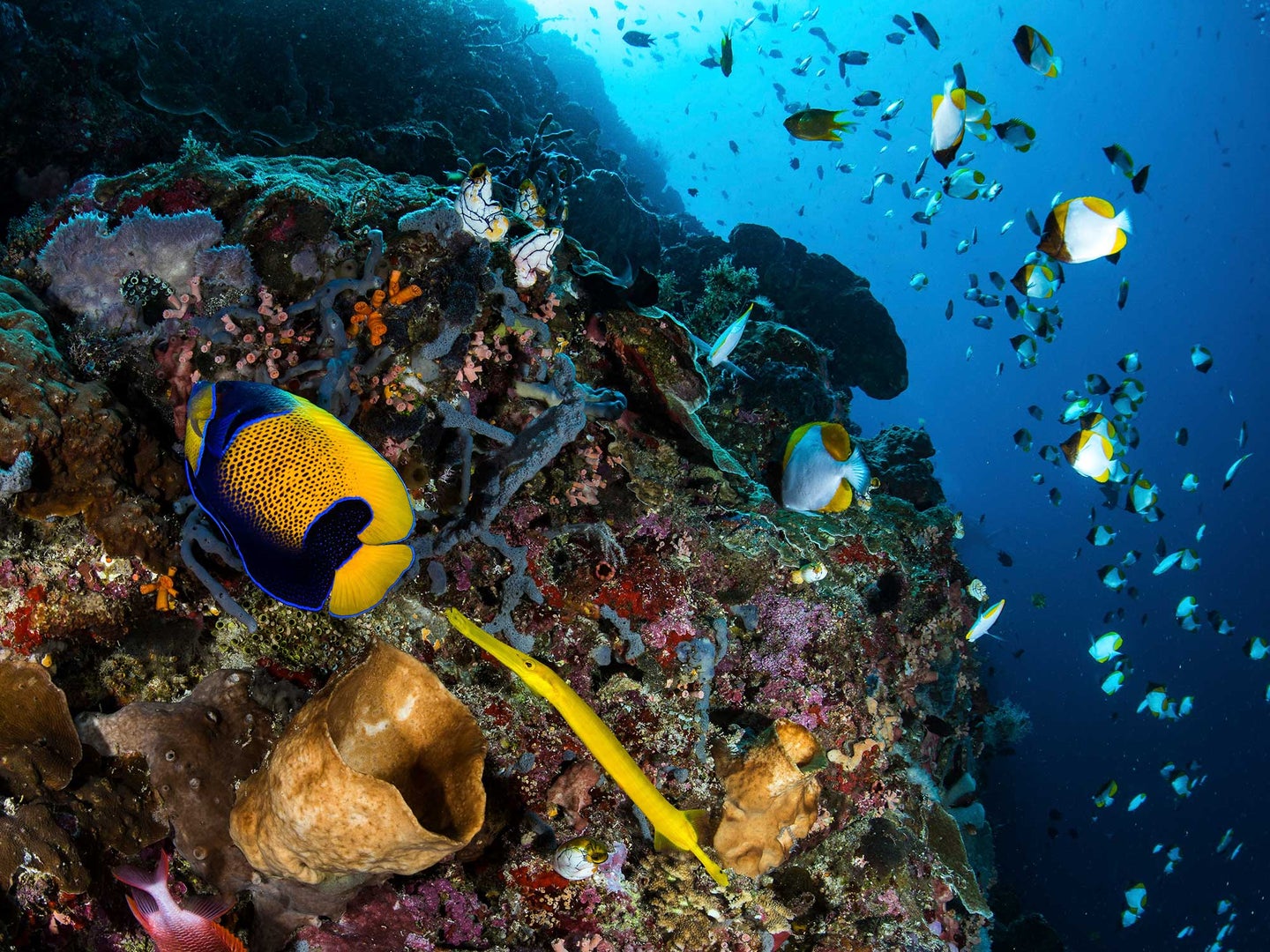 Flutemouth emerged roughly 65 million years ago, in the shadow of the asteroid impact that killed the non-avian dinosaurs. Getty Images
SHARE

Sixty-six million years ago, an asteroid nearly 10 kilometers wide slammed into what is now the Yucatan Peninsula in Mexico. The impact lit vast stretches of the planet on fire. Soot and dust choked the Earth. As the world burned, temperatures in the ocean plummeted, and creatures that once ruled, including ammonites, plesiosaurs, and mosasaurs, died out—along with 80 percent of the other animal species on the planet.

In the void, new life flourished.

Within three million years, new fish species were thriving on a reef of coral-like algae and large tuberous clams just 500 kilometers from the asteroid’s crater. One day, one of these fish—with an elongated snout and a delicate, slender body—died. It sank to the sandy seafloor where, along with other animals, the imprint of its skeleton was compressed into limestone.

The ocean receded and, in the seventh century, Maya builders constructing temples in the city state of Palenque began quarrying fossil-studded rocks from the now-dry seabed. The petrified creatures came to inform Maya beliefs about a previous world destroyed by fires and floods. One slab imprinted with fish was brought into the palace, where it was painted and adorned with plaster. Palenque’s residents used other fossils, including megalodon teeth and stingray spines, as cutting tools or buried them with the dead.

But the skeleton of the long-snouted fish remained buried in the quarry.

When Palenque, like many Maya city states, collapsed in the 10th century, its temples and their fossils were abandoned and swallowed by the forest. They lay forgotten until Spanish colonists began studying the site in the 1800s. But it wasn’t until the 2000s that researchers examined the impressions in the limestone more closely.

The fish fossils found in Palenque were from species that had never been seen before. “It was just like a movie script,” says marine biologist David Bellwood at James Cook University in Australia, who was brought in to help identify the fossilized fishes. “We found them on the lids of tombs.”

But the more shocking discovery came after paleontologists traced the limestone back to the quarry from which it was originally unearthed.

There, after millennia buried in stone, the long-snouted fish finally saw light—and upended our understanding of fish evolution.

Researchers identified the fish as a flutemouth, a species whose descendants live on modern coral reefs. Dozens of other fossils pulled from the quarry included two other families of reef fishes: damselfish and grouper.

Bellwood and his colleagues show in a new study that these fossils represent the earliest known examples of reef fishes found anywhere on Earth. Today, we think of grouper, flutemouth, and damselfish as coral reef fishes. But these groups actually emerged in a world before modern coral, which wouldn’t arrive on the scene for another 29 million years.

Before this discovery, the oldest evidence of reef fishes was from about 50 million years ago: fossils pulled from what is now Monte Bolca in northern Italy. Based on the diversity represented in those Italian fossils, some scientists suspected that reef fishes likely emerged earlier—closer in time to the asteroid impact. But no fossils from that period had ever been found. The specimens from the Palenque quarry, which date from between 65 and 63 million years ago, help fill in that gap.

Although grouper, flutemouth, and damselfish are the only existing families represented in the Palenque fossils, Bellwood thinks most other reef fishes likely evolved around the same time. The study also suggests that reef fishes emerged in the western Atlantic Ocean, rather than the ancient Tethys Ocean, near present-day Italy, as scientists had thought.

“These fossil deposits are really important for understanding the history of coral reef fish,” says David Wainwright, an evolutionary biologist at the University of California, Davis, who was not involved in the research. Wainwright notes that this study likely isn’t the final word on the origins of reef fishes. “We probably will eventually find another fossil that’s even older,” he says—maybe even one from before the asteroid hit.

Bellwood, for his part, is excited about what may still lie hidden in the Palenque quarries. Future excavations could yield even more fossils that further unravel the history of coral reef ecosystems. “Theoretically, there could be all sorts of fossils in there,” he says. “It could just be a magical little location.”