Knowing where your food comes from has never been trendier. But what does that mean for wild game hunters? 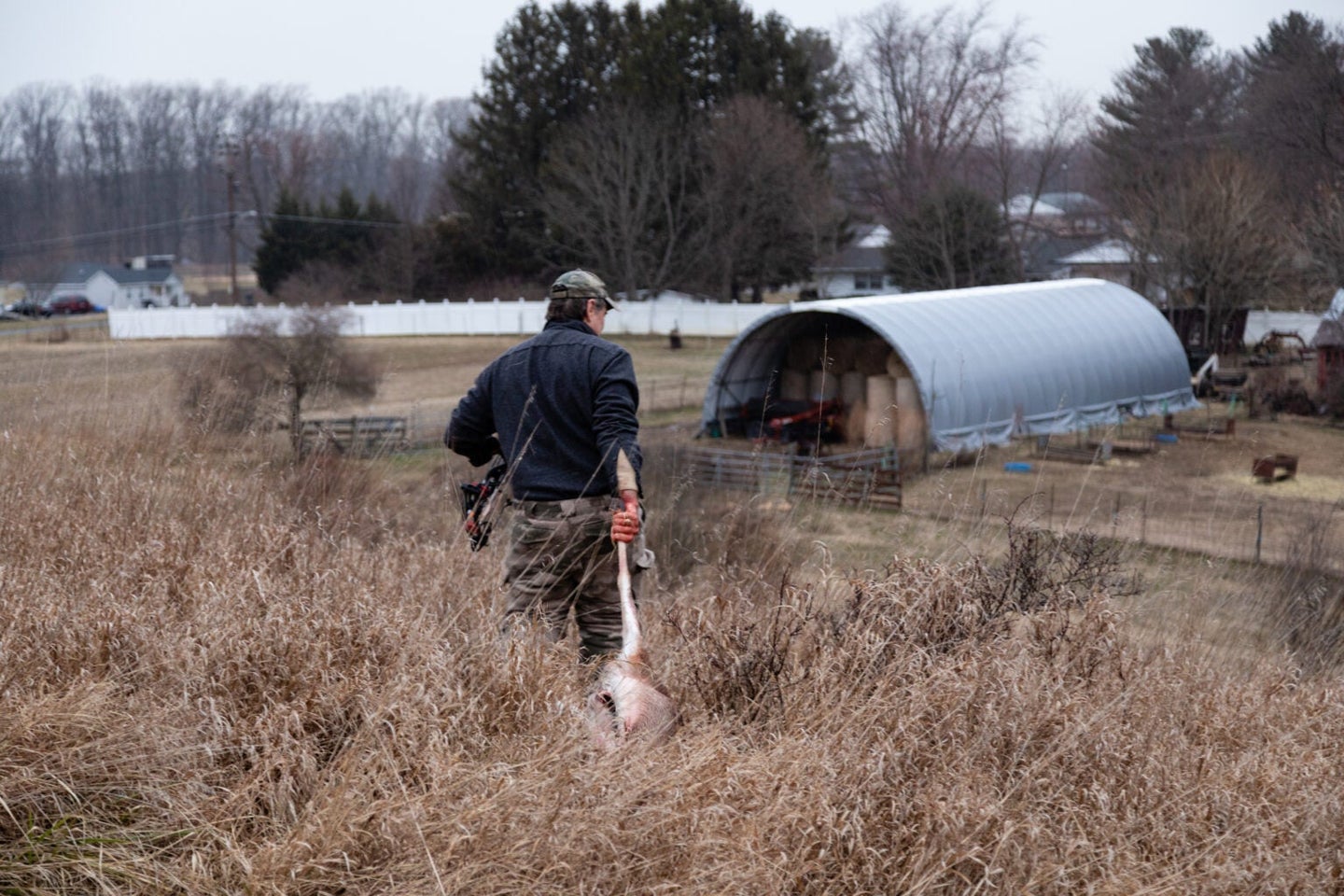 Deer hunting is hard work. The best new recruits to the sport are self-motivated, with plenty of support from experienced mentors. Will Parson/Chesapeake Bay Program
SHARE

I didn’t grow up hunting. None of my friends or family members hunted either. I fished various waters with my dad south of Chicago where we lived, so usually the Kankakee River. That was it. These days I’m a wild game cook, so you’re probably expecting me to tell you that it was the thrill of cooking game that got me into hunting. But that’s not the case.

Upon moving to Spokane, Washington, for graduate school at the age of 26, I met several people who were raised as hunters. The concept of earning your meat really struck me. You don’t have to rely on some butcher or even a guide at a hunting outfit to take your animal from field to table. Instead, there’d be blood in the cracks of your hands, under your fingernails. I’m not turning a blind eye to the death of an animal but rather, accepting the reality. This is how I choose to eat. The joy of cooking is ancillary.

Yet I know prominent personalities in the wild-game cooking community who profess that field-to-table is the future of hunting. They make some good points, noting that a younger generation that hasn’t been exposed to hunting is often more health conscious and mindful of where food comes from. Then there are those veteran hunters who are opposed to such a simplification of hunting, as former Outdoor Life hunting editor Will Brantley wrote in 2019, “Still, the even bigger problem is simply that we’re selling the hunting experience short by focusing on the food. And that’s bound to fail.”

The truth is: He isn’t wrong. Nor are those who are determined to make certain field-to-table is a cornerstone of hunting’s future.

New field-to-table hunters will stick with it

One of the most common criticisms of the field-to-fork pitch around hunting is that these new hunters won’t stick with it once they realize how hard hunting really is. But there’s some good data floating around suggesting that criticism might be unfounded.

Hank Forester, director of hunting heritage for the National Deer Association, and Georgia Wildlife Federation’s R3 coordinator Charles S. Evans, piloted their first Field to Fork recruitment program in 2016. This year, they have 45 events planned across 17 states. Thanks to surveys and coordination with state agencies, Forester is able to verify that of all the Field-to-Fork participants since the program’s inception, 80 percent continue hunting on their own after leaving the program. His key to success?

“In my opinion, creating a hunter comes down to confidence,” says Forester. “It’s all about building confidence, trying to get someone to get the confidence that, ‘This is something I can do and I’m going to do it.’”

For starters, any recruit in the Field to Fork program must either purchase or source their own hunting equipment, as well as buy their own hunting license. Nothing is provided, and that is where all participants begin, even during the trial phase. The idea is that independence helps grow confidence.

“We try to create a course that rewards that super avid hunter,” says Forester. “Everyone gets the same trial phase—a scheduled hunt—but follow-up hunts are first-come first-served…Some programs, we have 100 percent retention, parents perhaps taking kids next season or whatever. But on national average, it’s about 80 percent. That’s due to a lot of stuff, but we are really trying to do is to build community. The biggest barriers to hunting participation are perceived, not real. It’s flipping a switch, telling themselves they can do it. Everyone is different and needs a different level of confidence. Our mantra is learning to become confident as a hunter is fully obtainable.”

Sometimes that confidence begins with feeling comfortable behind a gun. Greg Ray became a hunting and fishing in outfitter in 2003, and after seeing enough clients miss longer shots on Western game, he added a long-range shooting school to the business in 2012. Then in spring 2019, he brought it all together with his first Outdoor Solutions Field-to-Table event.

“We conduct lessons on safety, how a firearm works,” says Ray. “Safety is the biggest thing—how to handle firearm in tight quarters like a blind, how to get in and out of vehicle with a firearm. Guides don’t like to be muzzle swept.”

Before students ever place their crosshairs on game, Ray wants them feeling confident taking longer shots.

“A lot of time we start them out at 100 yards, then get them out to 200, sometimes to 300,” said Ray. “Then we get them off that bench and have them experience what they will experience in the field. Put them on sticks and it’s a reality check.”

But Ray didn’t start his Field-to-Table series with the goal of recruiting new hunters, but rather teaching existing hunters about butchering and cooking game.

“When we started asking questions [of our clients], we found out there were people who have been hunting longer than I have who didn’t know some things about breaking down a deer—the difference between a top and a bottom round, for example.”

But in the series’ second year, Ray looked around the room and realized half of his classes, on average, were new hunters.

“Then first-time hunters come back two or three times because they wanted to try different species,” says Ray. “It’s turned into a movement we did not expect.”

Wild-game cooking is a motivator

Wild game chef Hank Shaw, author of the James-Beard-award-winning blog, “Hunter Angler Gardner Cook,” and five wild-game and -fish cookbooks including his latest, Hook, Line, and Supper: New Techniques and Master Recipes for Everything Caught in Lakes, Rivers and Streams, and at Sea has hosted hundreds of wild cooking and field-to-table events. During interactions with his audiences, he has seen one common theme,

“I’d argue [wild game cooking] is the single largest motivator for new adult hunters,” Shaw says. “In the last 10 years or so, I’ve seen enormous growth with who comes into the pursuit because of the food aspect… I’m in a position to see trends and I can see this trend clearly. I’ve been doing this for 20 years, and the number of new adult hunters from different backgrounds and different regions popping up on social media or contacting me directly has increased logarithmically over the last 5 years.”

But when asked to answer the direct question—“Can field-to-table save hunting?” Shaw believes that would be overstating the situation.

“I think it can flatten a dive, but I don’t see it radically changing the trajectory of hunting in the western world,” says Shaw. “Yes, it will alter the trajectory, but it won’t alter the ultimate direction.”

“The food is the gateway drug,” says Shaw. “Then people start to become competent in the outdoors in terms of woodsmanship and being able to read land and understand the animals. They’re in it for the food, but they stay for other aspects—it’s camaraderie or, to some extent, it’s a desire to protect habitat.”

Ultimately, hunting is about more than food

Sure, there are plenty of field-to-table advocates who say that knowing where their food comes from is the thing that gets them into the field. But if we hunter-cooks are being honest with ourselves, we have to admit: It’s not just the food.

Mark Norquist founded Modern Carnivore in 2011 with the mission to reconnect people to healthy eating through “direct harvest,” meaning foraging, fishing, and hunting. Norquist hosts up to four comprehensive learn-to-hunt, field-to-table courses each year. He believes it’s the complete adventure that gets hunters back into the field after the initial course.

“The universal appeal is food for a lot of students,” says Norquist, “but experiencing the hunt, what it means, seeing the sunrise and nature come to life, then the excitement of having an animal come to a call and having the opportunity to take that animal—to experience that process from start to finish, that is what makes the experience meaningful.”

In 2017, Norquist and his team hosted three first-year hunters as they filmed the 7-part docuseries “Awaken the Hunter Within.” Though none of these new hunters tagged out during filming, the experience helped them feel part of the hunting community and Norquist says that’s a crucial aspect for retaining hunters. Of the three hunters involved in the docuseries, two of three—Alex and Becca—are still hunting, with Alex having tagged out on his first deer shortly after filming. The third hunter, Pierce, moved across country, according to Norquist, and is having difficulty finding a like-minded hunting community.

“Staying connected with a community of like-minded people is important,” he says. “Everyone stays interested, but do they make it part of their active lifestyle?”

Though Norquist prefers to focus on the table component of the field-to-table experience, he admits there is a primitive aspect to hunting that goes beyond food.

“It’s human nature—you’re going have that rush,” he says. “You’re going to get excited and that adds a whole additional layer.”

For other hunters, the value of hunting is even more diverse. Pheasants Forever recognized this in 2019 when they began the “Path to the Uplands” initiative, which recruits new hunters by promoting topics like conservation, fitness, and dog training.

“It could be shooting sports, bird dogs, pollinators, wild game—there are several pathways to get people afield,” says Colby Kerber, hunting heritage program manager for Pheasants Forever. “We have avenues with Women on the Wing and conservation education. Then there are health-conscious folks who recognize the benefits of hiking, or those whose doctors are prescribing them to get outdoors.”

The multiple layers of hunting are what create the allure. Nothing with deep roots is one dimensional.

Read the rest of the case for field-to-table over at Outdoor Life.