Jewell will have to face some wildly controversial issues, including offshore drilling, hydraulic fracturing, and more. 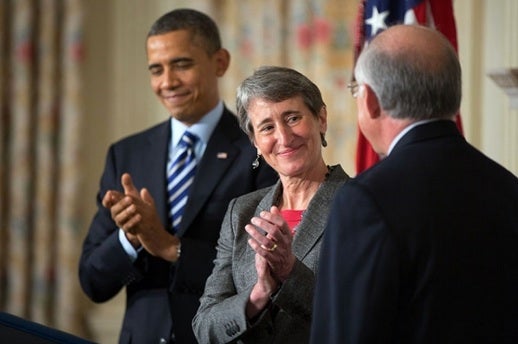 The new U.S. Secretary of the Interior, Sally Jewell, has both headed camping-gear company R.E.I. and worked as a petroleum engineer. As secretary, she’ll be in charge of perennially controversial decisions about conservation, recreation and oil and gas drilling.

In the final vote before her confirmation, the U.S. Senate voted 87-11 in Jewell’s favor April 10. Jewell will be sworn in this afternoon. She takes Ken Salazar’s place in President Barack Obama’s second cabinet.

The Seattle Times outlined some of the hotly debated questions Jewell will tackle:

Jewell worked in oil field engineering for three years before working as a banker for 19 years. In 2000, she joined R.E.I. as a chief officer, becoming chief executive officer in 2005.

The 11 votes against Jewell on Wednesday all came from Republicans. However, the top Republican in the Senate’s Committee on Energy and Natural Resources, Sen. Lisa Murkowski of Alaska, told the Hill she was hopeful Jewell would work with all sides.

conservation
Department of the Interior
Environment