When Laziness Pays: Getting Your Groceries Delivered Is Good For The Environment

Sit back, and let FreshDirect bring the milk and cookies to you. 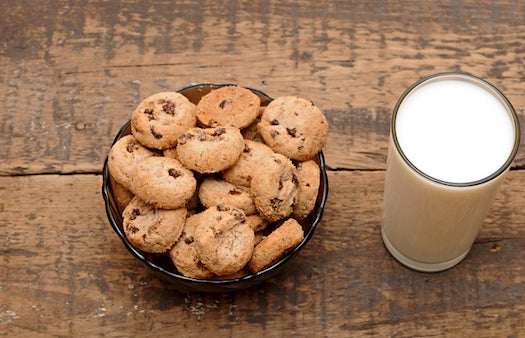 In case you wanted another excuse to just get everything delivered straight to your door… getting your groceries delivered emits less carbon dioxide than driving to the grocery store yourself, a new study found.

Even companies that don’t optimize their trucks’ driving routes, and instead just deliver when their customers want them to, create fewer emissions than all of those households would driving by themselves, according to a paper from two civil engineers at the University of Washington in Seattle. Every scenario the engineers examined was a win for delivery, which always saved on emissions by at least 17 percent for their study area around Seattle.

The savings would increase for less dense cities. They’re also better if companies have more customers and are able to optimize delivery routes, which led to 80 to 90 percent less carbon dioxide emissions compared to individual household grocery trips. 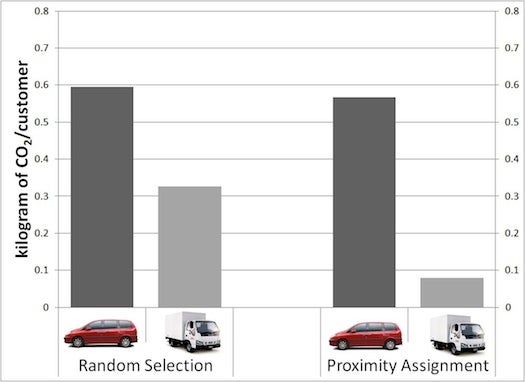 Home-delivered groceries save on carbon dioxide emissions whether companies deliver to households whenever they want (modeled by random selection, on the left) or through an optimized route (right).

Yes, this does mean that for some, sitting back, relaxing and getting their milk and Cookie Crisp delivered could be best for the planet. “A lot of times people think they have to inconvenience themselves to be greener, and that actually isn’t the case here,” Anne Goodchild, one of the engineers in the study, said in a press release from the University of Washington.

Sadly, however, Goodchild and her graduate student Erica Wygonik’s research doesn’t apply to those who now haul groceries by subway, bus or granny cart. It assumes everyone drives to his or her closest grocery store. (That’s too bad for this granny carter.)

To get their numbers, Goodchild and Erica Wygonik used a U.S. Environmental Protection Agency model for tailpipe emissions, plus data on road types, speed limits and grocery store locations around Seattle. They assumed everybody drove for groceries, and that one home delivery could replace one store trip.

Other studies throughout Europe have found the same thing: That home-delivered groceries are better for the environment than individual household trips, with similar percentage savings, Wygonik and Goodchild wrote in their paper. The new work shows services such as FreshDirect and AmazonFresh are saving emissions in U.S. cities, which differ from European ones in density and the layout of their roads, the Washington engineers said.