It's tempting to link the nature of this week's "Frankenstorm" to human-caused climate change, but the scientific realities are nuanced. Here are five surprising takeaways. 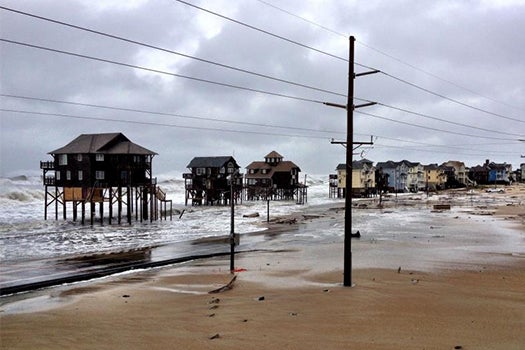 It may seem reasonable, then, to assume this year’s record-breaking weather event was tangible evidence of human-caused climate change. But is that accurate?

Below are five truths about the connection between climate change and storms such as Hurricane Sandy courtesy of Andrew Freedman. Freedman is a climate science writer and spokesperson for Climate Central, a non-profit organization that both conducts climate change research and communicates the results to the public.

Hurricane Sandy’s extremely large size (about 2,000 miles wide) is rare but not unexpected.

When tropical hurricanes crawl north into the Atlantic Ocean, they tend to expand in size as they transition into “extratropical” storms. These systems can link up with colder weather fronts, transforming their behavior and powering them as they move north or south of tropical latitudes.

“There have not been studies done showing links between storm sizes and climate change,” Freedman wrote in an email to Popular Science. “[T]here is anecdotal evidence suggesting that purely tropical storms/hurricanes could be expanding in size, but how that might be tied to climate change is unclear.”

In the future, North Atlantic hurricanes will drop in frequency, but grow in intensity.

Climate change is warming oceans around Earth, evaporating more water into the atmosphere and feeding storms that could brew into hurricanes.

According to the latest climate models, however, the frequency of these north-drifting extreme storms will drop in the coming decades–but their intensity and likelihood for causing damage will worsen.

“[T]he ones that do form may contain stronger winds and heavier rains,” Freedman says. “As sea surface temperatures warm up, hurricanes may be able to sustain themselves farther north than they used to, making the prospect of more New England landfalls a bit more likely.”

Hurricane Sandy, says Freedman, fed off of tropical surface temperatures between 2 and 5 degrees Fahrenheit above average for this time of year.

Hurricanes outside the North Atlantic, however, may grow both in size and frequency.

The U.S. East Coast may endure fewer but more powerful hurricanes in the future, yet the tropics–including the Caribbean Sea and Gulf of Mexico–may see more powerful storms more often.

“[S]tudies of storm intensity/frequency in a warming world show changes on the order of 5 to 10 percent several decades from now,” Freedman says.

Over the years Popular Science has told the stories of people trying to control and monitor Mother Nature’s wildest weather.

Most recently we detailed a plan to fly water-sprinkling robotic drones above oceans that spawn hurricanes. The concept: seed thicker clouds, reduce sunlight to the ocean’s surface, and ultimately reduce evaporating water that feeds hurricanes.

No one has tried out the idea, but Freedman says history is against human meddling with nature. “Efforts at modifying hurricanes through cloud seeding or other methods have always been a spectacular failure.”

Compared to other sets of climate data, historical knowledge of hurricanes is weak.

Unfortunately, says Freedman, “A big impediment to making firmer conclusions on the link between hurricanes and climate change is that the historical record is not very reliable prior to the 1950s or so, when hurricane reconnaissance missions became more commonplace.”

“If you go back to the 19th and early 20th centuries, if a storm missed land and didn’t affect many ships, it probably went undetected. That means that scientists don’t have a very long record of good data with which to detect trends.”

Scientists haven’t given up on recovering what ocean-based records they can. One effort called Old Weather, for example, asks people with spare time to translate ships’ logbooks and extract weather data, which researchers can then use to both understand historic weather patterns and model future ones.