Wind turbines of the future will be hulking behemoths, each capable of producing multiple megawatts of power. But before they’re... 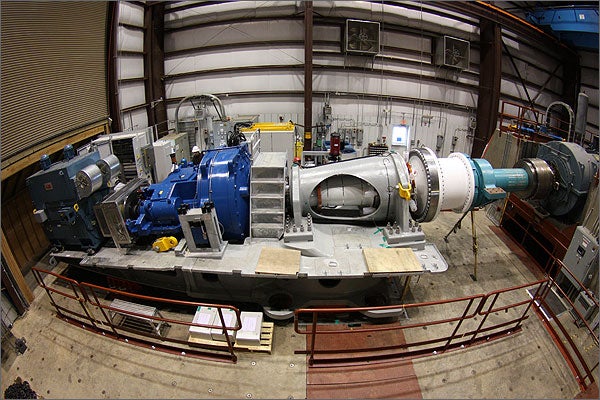 Wind turbines of the future will be hulking behemoths, each capable of producing multiple megawatts of power. But before they’re installed in wind farms, manufacturers need to be sure they are built to last. To this end, a monstrous 2.5-MW turbine–one of the world’s largest–just survived an equally big test.

The 2.5-megawatt dynamometer at the National Renewable Energy Laboratory blasted the turbine’s drive train, built by Samsung, with 12.6 million inch-pounds of torque, the energy lab says.

In other words, the turbine drive train went through years of wear and tear in about two months. It was the largest full-scale dynamometer test of a wind turbine ever done in the United States, NREL says.

The dynamometer — a cool name for a machine that measures force and torque — has a 3,550-horsepower electric motor coupled to a three-stage epicyclic gearbox, according to NREL. It can produce speeds up to 30 revolutions per minute, meaning it can simulate anything from a slight breeze to a full-force gale.

Computer models simulate the tower, rotor and turbine blades, and other models calculate what the main shaft torque should be, depending on weather conditions. The shaft therefore responds to various wind conditions just like it would in the field, NREL says. 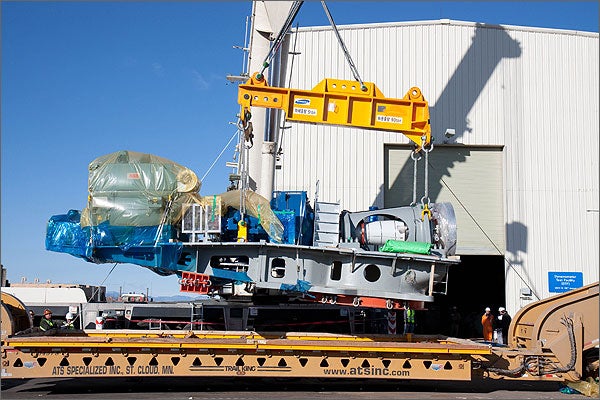 NREL technicians unload a 90-ton Samsung wind turbine drive train after it made the trip on semi-trailers from Houston to NREL’s National Wind Technology Center.

Samsung has a 2.5-MW turbine in operation in Texas, but it’s never been tested above 600 kilowatts. Samsung wanted to take its drive shaft out for a spin, so the company shipped the 185,000-pound device from Houston to Golden, Colo., using a gigantic 185-foot-long, 19-axle rig.

All this bigness is peanuts compared to future wind turbines, however — NREL is already building a 5-MW dynamometer, which would be capable of testing the next generation of huge wind turbines.