A Quarter-Century After the Worst Toxic-Gas Leak in History, Questions Linger

Eleven-year-old Salu Raikwar, born with six fingers on both hands, walks near the Union Carbide pesticide plant in Bhopal, India.... 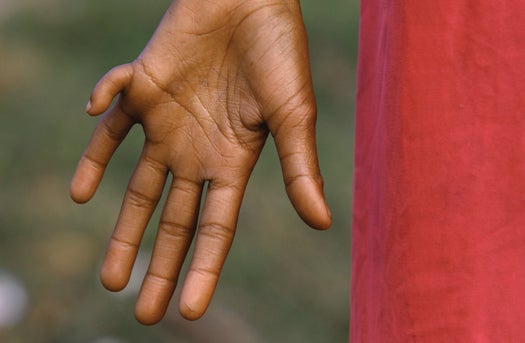 Eleven-year-old Salu Raikwar, born with six fingers on both hands, walks near the Union Carbide pesticide plant in Bhopal, India. In December 1984 an estimated 27 tons of toxic methyl isocyanate (MIC) gas leaked from the plant and into the environment. The disaster resulted in the death of more than 6,000 people.

Now, with the passing of the 25th anniversary of the disaster, anecdotal evidence and reports not publicly available suggest a long-lasting legacy in the form of higher rates of cancer, delayed growth, and birth defects like webbed or extra fingers and cleft palates in children of parents exposed to the chemical, but no comprehensive studies have been made.

The genetic and carcinogenic effects of MIC will become most apparent in long-term studies that “are crying out to be done,” says epidemiologist Sushma Aquilla, a member of the International Medical Commission on Bhopal, which in 1994 conducted an independent assessment of adults directly affected by the disaster. Despite the Indian Council of Medical Research issuing a call for such studies last year, there has been a lack of interest in doing them, Aquilla says. To her, it seems that some people “would actually like to forget the incident.”