Could deprive regions of the globe of oxygen 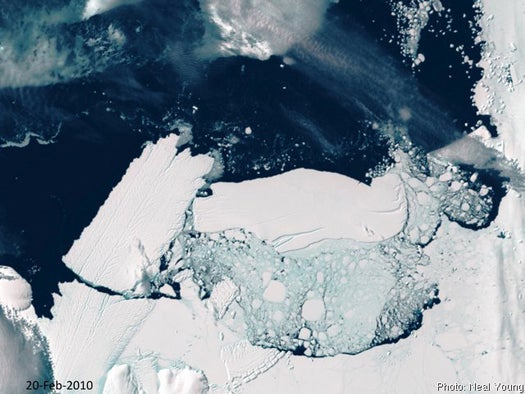 The former piece of the glacier is on the left, with the striking iceberg that snapped it off on the right. Neal Young, © Commonwealth of Australia, via The Australia Arctic Division
SHARE

This month, an iceberg roughly the size of Luxembourg slammed into an Antarctic glacier known as the Mertz Ice Tongue. Then, last week, a Rhode Island-sized section of the Mertz Ice Tongue finally snapped off. Some scientists are excited about the new research opportunities this ice reconfiguration opens up, but others worry that the newly freed ice will significantly threaten life in the ocean.

For the worried scientists, the newly formed iceberg could potentially disrupt the undersea currents that ferry oxygen throughout the oceans. With that oxygen dispersal interrupted, areas of the ocean could fail to receive the oxygen needed to support life.

“There may be regions of the world’s oceans that lose oxygen, and then of course most of the life there will die,” Mario Hoppema, chemical oceanographer at the Alfred Wegener Institute for Polar and Marine Research in Germany, told the Associated Press.

However, on the bright side, Michael Meredith of the British Antarctic Survey told the BBC that the new iceberg probably isn’t large enough to effect global climate patterns.

Instead, Meredith noted that the reconfiguration of Antarctic geography created a virtual laboratory where scientists can monitor how iceberg separation affects ocean ecosystems.