Largest Iceberg Seen in a Century Now Floating Toward Australia

A massive iceberg twice the size of Manhattan is headed for Australia’s southwestern coast, threatening shipping lanes in the Pacific.... 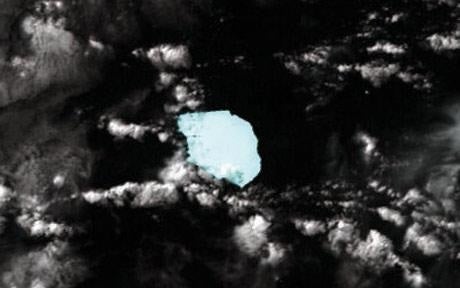 A massive iceberg twice the size of Manhattan is headed for Australia’s southwestern coast, threatening shipping lanes in the Pacific.

The “superberg,” called B17B, is roughly 1,000 miles off the coast of Australia and headed for warmer waters, where it will likely break up into many small pieces.

The ‘berg broke off the Ross Ice Shelf in Antarctica in 2000, and has been floating in the cold waters of the Pacific until recently, when ocean currents and weather conditions nudged it north. Australia’s Bureau of Meteorology issued a shipping alert Friday after the iceberg was seen off the country’s southwestern coast.

Several other icebergs have been spotted near New Zealand in recent weeks, but none was as big as B17B, which 87 square miles in area — is about double the size of Sydney Harbor.

Australian media quoted a glaciologist who said if the iceberg crashed into the continental shelf, it would cause a magnitude three to four earthquake. But it will probably disintegrate into a flotilla of smaller icebergs before that can happen.

The glacial “calving” that causes icebergs is a natural process; ice sheets grow as snow falls upon them and creates more ice, which flows to the edges. Eventually, some pieces break off. But B17B is a once-in-a-century iceberg. Glaciologist Neal Young told the Telegraph that icebergs of its size have probably not been seen since 19th-century clipper ships traveled between Britain and Australia.

But, he adds, superbergs may become more common as sea temperatures rise because of global warming.