Human Blood May Hold the Secret to Clean Coal

As geologists probe the world’s rocky sediments for spots to safely store carbon dioxide underground, engineers are working on the... 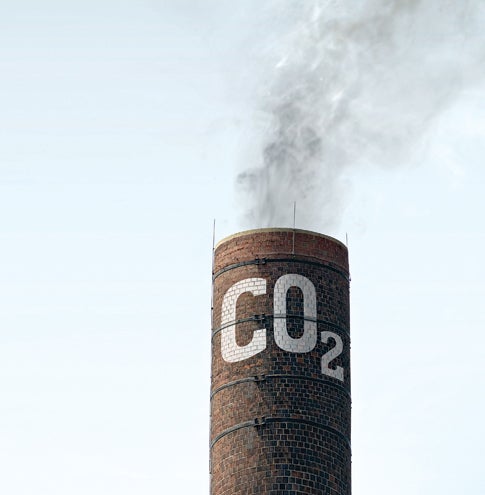 As geologists probe the world’s rocky sediments for spots to safely store carbon dioxide underground, engineers are working on the first step of the process: separating pure CO2 from noxious smokestack emissions. An enzyme in our blood already has the trick down, however, and it captures two pounds of CO2 every day. Now a New Jersey company is trying to replicate the method.

As cells pump CO2 produced during respiration into the blood, the enzyme carbonic anhydrase converts the gas into bicarbonate for easier transport to the lungs. There the same enzyme works in reverse, turning the molecules back into the CO2 gas you exhale. This action could play the critical role of selectively capturing CO2 from mixed gas emissions for later sequestration.

The company Carbozyme is finishing up lab tests of a system that consists of millions of microscale, porous tubes coated with a synthetic version of the enzyme. As a mixture of smokestack gases passes through the tubes, the enzyme pulls CO2 from the mix and turns it into bicarbonate and back, isolating CO2 so it could be pumped underground and stored in layers of basalt rock. Based on lab tests and models, the system should use about a third less energy than other methods while avoiding the hazardous chemicals typically used to grab CO2.

Next year, Carbozyme plans to run a pilot project on coal burners at the University of North Dakota. If all goes well, it will license the tech to power plants, helping the world finally realize the concept of “clean coal.”