For almost two years, the honeybees that support almost all human agriculture have fought a plague right out of a... 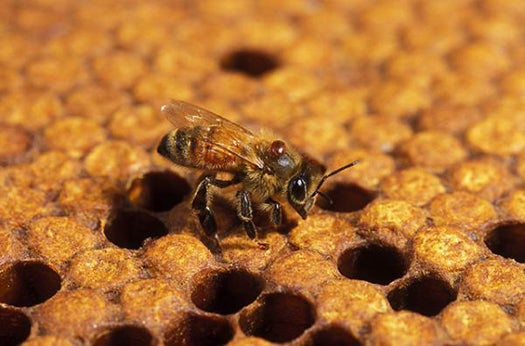 For almost two years, the honeybees that support almost all human agriculture have fought a plague right out of a sci-fi movie. Varroa mites, a deadly parasite, have hid in the labyrinthine combs of beehives, feeding off the juices of still-living insects, and causing the the problem we know as Colony Collapse Disorder.

To help our bee allies fend off the alien invaders, the Agriculture Research Service division of the Department of Agriculture has created a new breed of super-vigilant bees that will take the fight to the mites.

Regular honeybees conduct routine sweeps of their hives for the varroa mite, throwing any mites or infected bees they find out of the hive on contact. But these cursory checks often miss the parasites. The mites hide in the capped eggs seen in the picture above, out of sight of patrols and with access to the defenseless larvae.

To combat the mite problem, the Agricultural Research Service took that natural hive cleaning instinct and bred it into overdrive. The newly bred bees show a increased aggression in their mite hunts, team up with each other to bite through the egg caps, and rooted out and eradicated the mites where ever they hid.

With this new bee breed on the loose, and the Department of Agriculture’s instructions for easy ways for bee keepers to breed their own mite-hunting bees, the mites that cause Colony Collapse have gone from hunter to hunted.