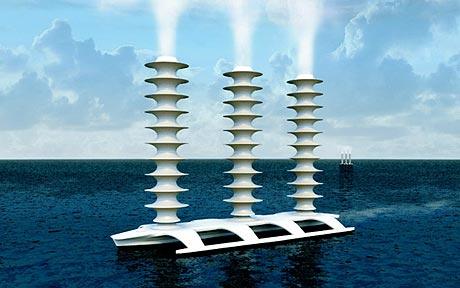 A flotilla of “cloud ships” spraying sea water from their funnels could avert global warming for just $9 billion, according to a new think tank study headed by a former climate change skeptic. That’s in comparison to the $250 billion which leading nations would consider spending each year to cut carbon dioxide emissions.

The Times reports that U.S. and British scientists have begun fundraising for sea trials, and want to eventually deploy 1,900 wind-powered ships within 25 years. Such a fleet would create white clouds to reflect sunlight and reduce global temperatures, and will likely gain the endorsement of the UK’s Royal Society.

Surprisingly, the latest backing for the proposal comes from Bjorn Lomborg, the Danish political scientist who authoered the controversial book “The Skeptical Environmentalist” and founded the Copenhagen Consensus Centre which released the recent study.

Lomborg told the Financial Times that he wanted to find cheaper ways of halting rising temperatures, and made no apologies for his about-face concerning his former climate change skepticism.

Geoengineering still represents a radical approach for many scientists when compared with cutting down on carbon dioxide emissions, even though the idea has become part of cautious discussions by the likes of the U.S. National Academy of Sciences and the White House science advisor.

Some thinkers such as billionaire Bill Gates have even looked at using similar ship-borne schemes to try and slow or halt hurricanes. But either way, critics point out that grand geoengineering plans can have unwanted consequences.

Lomborg’s fresh support for geoengineering won’t likely quell the fears of opponents. Many environmentalists and policy experts have already expressed their concerns about the idea to Bloomberg and other media outlets.