Pythons Wreaking Havoc in the Everglades? Send in the UAVs

USGS, University of Florida want to enlist unmanned drones in the search for invasive Burmese pythons in the Everglades 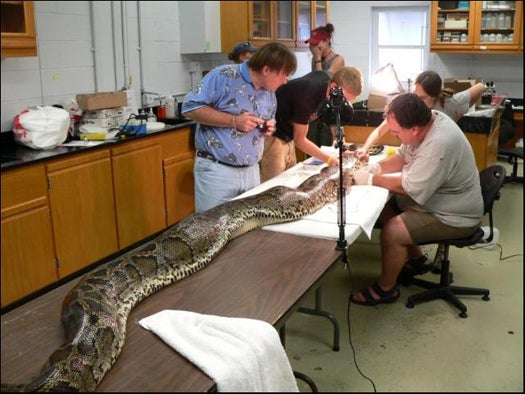 Researchers attach a radio tracker to a Burmese python. courtesy of the University of Florida
SHARE

For years, Burmese pythons have invaded Florida’s Everglades National Park, preying on indigenous species. Tracking them down has proven time consuming and difficult, so Park wardens have begun testing a new hunting method imported straight from the front lines of the War on Terror: unmanned aerial vehicles (UAVs) and thermal imaging technology.

David Hallac of The National Park Service already uses manned, fixed-wing aircraft to search the Everglades for birds, and he said moving to UAVs to cut down on costs is the natural next step.

Additionally, recent tests by the scientists at the University of Florida have shown that thermal imaging can detect the snakes, even though their cold-blooded bodies reflect the heat of their environment.

According to Frank Mazzotti, an Associate Professor of Wildlife Ecology at the University of Florida and one of the scientists who hunts for the pythons, the snakes regulate the temperature of their nests in a way that makes them easily visible through thermal imaging.

Despite being cold blooded, the pythons keep their nests cool in the heat, and shiver to warm up the nests when it gets too cold, providing a heat contrast to the surrounding environment.

“Whether its really hot or really cold, the nest stands out on the thermal imager,” said Mazzotti. “Someone using that to find python nests might be the best move, because by going for the nests, you target the population.”

Interestingly, while both the UAV and the thermal imaging search programs are moving a head at a rapid pace, there are currently no plans to combine the two technologies and put thermal imaging cameras on the UAVs. However, that doesn’t mean the natural pairing of heat sensors and UAVs won’t occur sooner rather than later.

“We haven’t tested either, and I’m not wise enough to have a clever phrase about trying out two untested technologies together,” said Mazzotti, “but I think down the road they’re gonna get coupled.”