Malaria kills upwards of a million people a year, infects hundreds of millions, and significantly damages the economies of dozens... 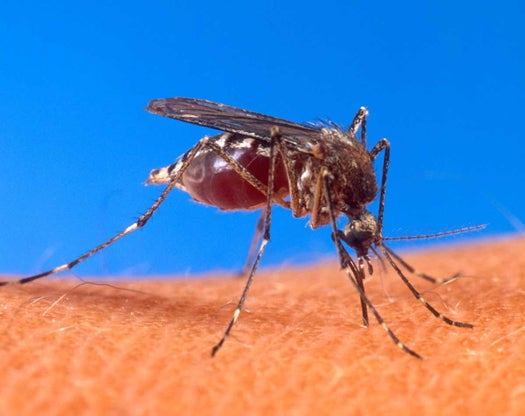 Malaria kills upwards of a million people a year, infects hundreds of millions, and significantly damages the economies of dozens of countries. Cures and prophylaxis for malaria range from bug nets to drugs to gin and tonics, but none are weirder — or more poetically just — than a new method that uses mosquitoes themselves to deliver a malaria vaccine.

As reported yesterday in the New England Journal of Medicine (NEJM), a team of Dutch scientists exposed a group of volunteers who had been taking anti-malaria medication to a swarm of mosquitoes carrying the parasite.

The anti-malaria medication held off the development of the disease, buying time for the volunteers’ immune systems to develop resistance to malaria. And while this method is far from practical on a large scale, it does show that a whole disease can serve as its own vaccine amongst a properly protected population.

And this news couldn’t have come sooner, as in the very same issue of the NEJM, another paper reported that malaria found in Cambodia has become resistant to the most effective drugs used to prevent the disease. The authors of that study believe that misuse of malaria medication gave the parasite the chance to evolve resistance. They also warned that the spread of a resistant strain of malaria could be especially dire, seeing as the disease, even with all the preventative measures already developed, is the world’s third deadliest.

[via The New England Journal of Medicine]