The Green Dream: A Whole-House Lighting System That Creates Its Own Energy

Every home needs lights. But for the Green Dream? Forget copper wire between lights and light switches, three-way switches and... 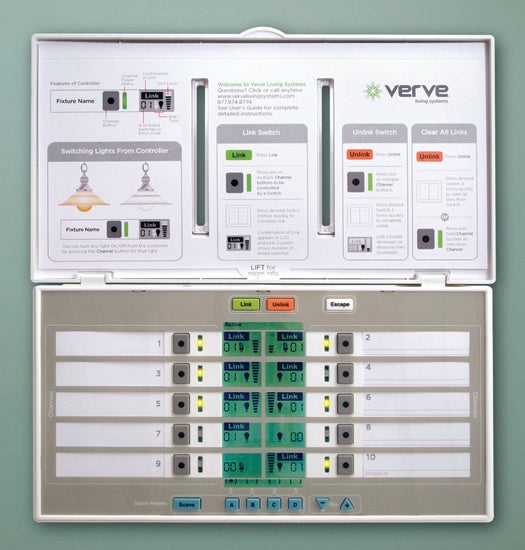 Every home needs lights. But for the Green Dream? Forget copper wire between lights and light switches, three-way switches and batteries; I’m looking at Verve’s lighting control system—-a wireless solution that uses radio frequencies to control a home’s lights, allowing you to put your light switches wherever you want–on your wall, in your pocket or even the dash of your car.

The energy harvested from physically moving the switches on Verve’s control panel is enough to transmit a radio signal as far as 300 feet to a central controller, which then relays the power to the individual hardwired lights or outlets. Enocean first developed the switches, that generate their own power via electro-dynamic generators linked to the movement of the light switches themselves. 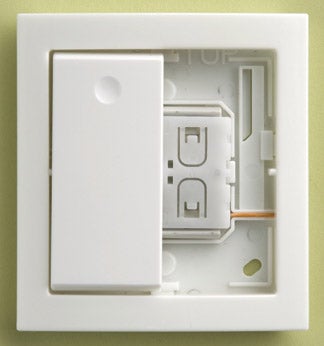 The switch itself does not offer a status “on” or “off” light like some of the more expensive systems, but the central controller hubs, which are programmable, can give you a whole-house status report. The user can setup an unlimited number of scenes in minutes–each controller is networked to the other for total house lighting control from a single switch.

But the killer thing? You can tack the switch to almost any surface and move it without the need to pull wires and rip up your walls. The switch is basically just a remote control that lives anywhere you want it (within range of the controller that is). It is not silent but rather makes a solid click sound so you get feedback even if you don’t have status lights on the switch itself.

And now, for why this fits with the Green Dream: This will save hundreds of feet of copper wire and tons of labor time on the install. The first thing I thought of was the ability to fully shut down all the power that my house is burning when I drive off–the satellite box, the light that I left on near the bed, etc. With a simple click I’m saving money! They say that the total cost for a 3,000 square foot home is about $3,000. The sad part? The system is designed for new constructions only–no retrofits!

I asked architectural lighting designer Sean O’Conner what he thought of the system:

“Verve offers a great value proposition for a residential lighting system.  It offers the preset scenes you would expect along with great flexibility and ease of installation not found in other systems and at an amazingly affordable price.  It is also easily programmed by the end user without factory commissioning – another cost savings.  It appears that for just a little more than a house full of nice dimmers you could have Verve.

That said the Verve system is kind of a “light” version of a lighting control system.  Whole-home lighting controls systems offer more complex programming, advanced logic, multiple button keypads, engraved buttons, LED status lights for presets and dimmers. But that doesn’t seem like much of a tradeoff when you consider the price!”