Boars are more dangerous than people realize -- and they're multiplying, possibly because of global warming. Will grave-robbing, pet-eating hogs take over the American South? 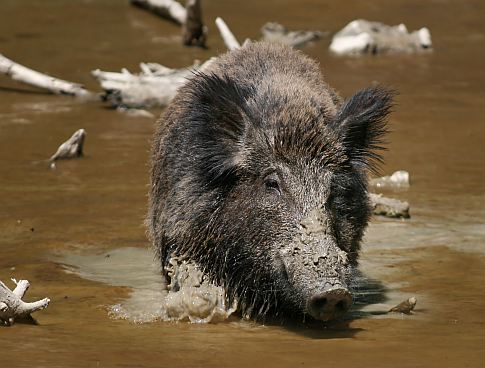 Normally, the worst thing one of Germany’s wild boars will do is ruin a field of corn, which is one of their favorite foods. Lately, however, as their population has exploded —  scientists estimate that it increased by 320 percent in Germany in the last year alone — the pigs have been having more and more encounters with humans.

This has led to a scarcely believable litany of porcine offenses, including smashing up a shop, rampaging through a hardware store, chasing police, doing thousands of euros’ worth of damage to a car, killing a hunter, storming a church, knocking a 76-year-old woman off her bicycle, and digging up and eating human corpses.

Scientists believe the explosive growth of boar populations in Germany is due to an increase in cultivation of corn in that country, combined with milder winters, which some blame on climate change. (Which is not to say that climate change isn’t the culprit —  rather, the point is that weather is not the same as climate.) These warmer winters mean more acorns and chestnuts for the boars, which has led to litters as large as 8 or 9 piglets. Last year, just to keep the population stable, German hunters shot almost half a million boars.

Did we mention that the feral descendants of introduced European boars also live throughout the American South, and that, like Germany, the U.S. is beset by an exploding population of wild hogs?

The problem is so bad that according to the Telegraph, “Federal strike teams armed with machine guns stage aerial assaults while landowners in badly affected areas turn to a growing band of private trappers and hunters.”

You may have heard of Hogzilla, the 850-pound hybrid of a domesticated and a wild hog that was shot by hunters in Alabama in 2004. National Geographic later exhumed the corpse and verified that a feral hog that big would have to be pen-raised, which means hogs that big don’t just happen by accident.

Not that it matters much whether a hog is 850 pounds or 400 pounds —  the maximum size that wildlife biologists say a wild hog will reach in the U.S. —  when it’s chasing you across your college campus, which is what happened to one student at Florida Gulf Coast University in 2004. Hogs have a top speed of 30 miles per hour, and while they prefer to run away from humans, they will attack, and these attacks can be fatal.

Ever since the introduction of boars to the U.S. by humans, their status as a menace has been almost entirely our fault. In Alabama, the hogs enter new territories mostly because hunters who want to have hogs in their area transport them there. Hogs damage crops and can spread disease to both humans and domestic pigs. In addition to flu, they can also carry anthrax, brucellosis, pseudorabies, and tuberculosis.

Hogs can be shot, trapped, or baited with food laced with contraceptives, but given that there are four million largely nocturnal, notoriously intelligent, and highly adaptable hogs in the U.S. already, it’s extremely unlikely we can ever get rid of them completely. (Nor would we want to — apparently their flesh is delicious.) Is it any wonder these animals recently inspired a pair of awful B-movies? (Not to mention the classic Aussie killer-pig flick Razorback.)