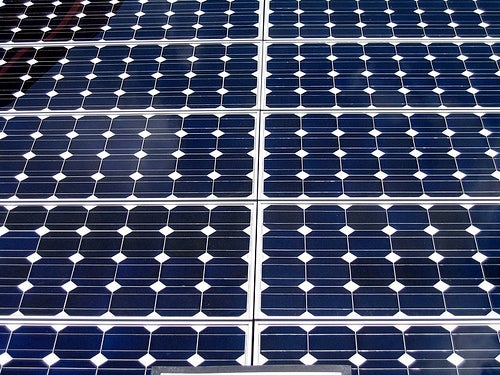 Ordinary solar panels are inefficient, reflecting nearly a third of incoming sunlight. A new process based on the structure of moth eyes will bring that number down to less than two percent. Kevin Thoule
SHARE

The next frontier in traditional solar panels is concentrators – devices, usually lenses, that concentrate solar power onto the most expensive part of a solar panel – the silicon. Skyline Solar’s “solar trough” design concentrates sunlight without using expensive lenses or complicated robotic armatures for tracking the sun as it crosses the sky.

The entire system is built from commodity parts in an effort to make it cheap and scalable – the ultimate goal being ‘grid parity,’ or a system that is competitive with fossil fuels as a means of generating electricity. That’s why the Department of Energy gave Skyline a $3 million grant as part of its Solar Energy Technologies Program. (Investors have plunked down another $25 million.)

Proponents of concentration photovoltaics have long argued that the technology has the potential to slash the cost of solar power, but until now, it has represented an incremental cost savings at best. Indeed, many industry observers believe that thin film solar, a competing technology, is the one to watch.

Skyline Solar’s approach is straightforward and therefore, potentially, a winner. Long, curved, shiny panels of aluminum concentrate the sun’s energy onto custom-built strips of solar photovoltaics – the same stuff that is on conventional solar panels. There are no lenses, and the troughs only have to rotate along a single axis in order to track the sun, in contrast to competing systems that require more complicated (and less reliable) two-axis tracking to keep flat panels always facing directly into the sun.

Skyline Solar has already put up its first demonstration plant, in San Jose, California, for Santa Clara Valley Transportation Authority. The company claims that the technology is suitable for any city that gets at least as much sunshine as New York City, and plants based on it are economical at the 100 kilowatt to 100 megawatt range of power production. By comparison, a smallish coal-fired power plant would be about 500 megawatts, and most solar PV plants top out at a hundred or so kilowatts.

“What we are developing is a linear concentrator at the core,” said Skyline CEO Bob MacDonald at an early reveal of the technology. “It’s a quite straightforward design that takes a reflective optical sheet and forms it into a parabolic section that focuses the light onto a straight line…. So, it’s essentially a silicon module that’s enclosed by an aluminum reflector.”

Only time will tell who will win the race to make solar energy competitive with fossil fuels for electricity production, and all forms of solar photovoltaics are starting the race at the back of the pack. Concentrated solar power, wind turbines and even geothermal power all produce power at a significantly lower cost.