Or befriend the bear? 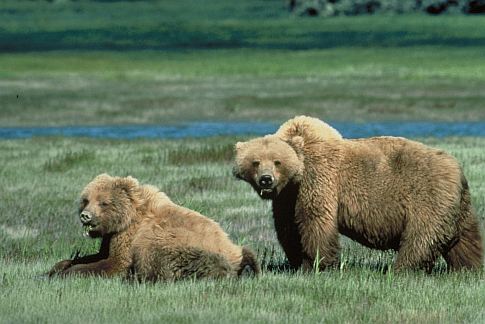 This story of a man and his best friend, an 800-pound grizzly bear, is sweet and all. And it’s pretty cute that the bear served as best man in his wedding. But doesn’t this kind of thing always come back around to literally bite you in the butt? Incidentally, one of the google ads running along the bottom of the video was, “Bear Butchered Man in Ukrainian Zoo.”

A preliminary study suggests that forest fires that burn pine trees could be releasing chemicals that, in sufficient quantity, can be harmful toxins. And the cooler, controlled burns that are used to control wildfires may be more likely to produce more of these alkaloids.

People love islands: they harbor monsters like Caliban and angry adolescent boys; they host crazy Cossack big-game hunters and lead to the creation of dwarfed species. And now, in a finding sure to bring back the olive oil craze, researchers have determined that a tiny Greek island has the highest percentage of nonagenarians in the world.

It looks almost like a crotch rocket, but only reaches 70 miles an hour: A reviewer finds that the Zero S electric motorcycle isn’t too bad, but isn’t worth the price. With a range of 60 miles on one four-hour charge, the bike isn’t yet built to go far.