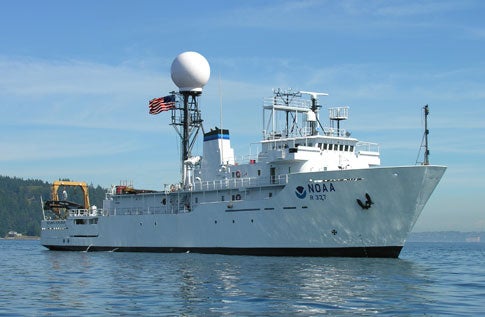 Boldly going where no man has gone before doesn’t take a spaceship—just a big boat and powerful sonar equipment. We know the altitude of every mountain and canyon on Mars, but 95 percent of the world’s oceans—including huge swaths of submerged land that the U.S. claims as sovereign territory—remain totally unexplored.

Aiming to correct this deficiency, later this year the National Oceanic and Atmospheric Administration will dispatch the Okeanos Explorer, the first vessel with a permanent mission to explore the deepest reaches of the seas. Okeanos marks the launch of a fresh research strategy: Whereas most ocean-science missions investigate specific hypotheses over the course of a few weeks, Okeanos will embark on a nonstop hypothesis-generating voyage, pausing whenever something appears particularly interesting. The expectation is that a vessel that is fully devoted to exploration will turn up more discoveries.

Scientists have barely dipped their toes into the ocean, but forays into the depths have already yielded some amazing treasures, including valuable copper deposits and sea creatures that produce cancer-fighting chemicals. “Look at how little we’ve looked at and how much we’ve found,” says Robert Ballard, an oceanography professor at the University of Rhode Island. Ballard, famous for co-discovering the wreck of the Titanic in 1985, advocated for $23 million in funding from NOAA to convert a former Navy ship into a research vessel because “we simply don’t know what’s out there.”

Chief among Okeanos‘s tools is an advanced sonar system that generates high-resolution, three-dimensional maps of the seafloor down to 19,700 feet, allowing researchers to identify the most interesting areas to explore. It will also carry a remotely operated vehicle (ROV) equipped with high-definition cameras, sample collectors and floodlights. This robotic sub can deploy a smaller, tethered ROV to fit into tight spots or to get a closer look at delicate objects. The boat’s dynamic positioning system monitors the ship’s GPS coordinates and regulates the engine’s thrusters to keep its 224-foot-long frame steady while the ROV explores.

The highest-bandwidth satellite connection ever installed on a research vessel makes possible Okeanos‘s most unusual feature: a skeleton crew of scientists. Data will beam in near-real time to mission control at the University of Rhode Island, called the Inner Space Center, that can relay the information to four more centers around the country. Scientists will be on duty around the clock to analyze the incoming maps and video and direct the dozen technicians on the ship. This command-center approach will involve far more scientists than have traditionally been possible and allow land-based specialists to quickly weigh in on discoveries.

Okeanos is now docked in Seattle’s Puget Sound, but this summer NOAA engineers will sail the ship around the West Coast to thoroughly test its sonar and ROV systems. After that, it will probably head to the western Pacific and the newly established Papahanaumokuakea Marine National Monument off Hawaii. The region’s underwater mountains and hydrothermal vents—gashes in the seafloor that spew 700˚F water and harbor unusual organisms—should get the mission off to a productive start. Along the way, scientists expect to discover mineral deposits, shipwrecks and countless animal species, some of which researchers on land will study for disease-fighting potential. NOAA will share everything that it uncovers, but it may withold the location of certain finds to ensure proper management of fragile ecosystems.

Already the promise of Okeanos has generated excitement among ocean scientists. “Mankind has always been enchanted with exploring space, no matter the cost or the remote prospect of improving the human condition,” says Marcia McNutt, president of the Monterey Bay Aquarium Research Institute. “But the most important discoveries will be made in the undersea universe in our backyard.”