Instrument makers are now focusing on sustainability as well as sustain 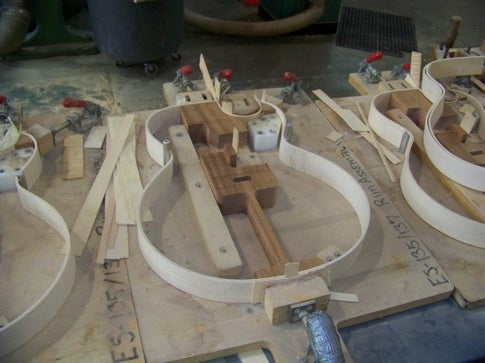 Dear EarthTalk: I’m a musician and am curious about what the guitar industry is doing to ensure that the wood it uses is not destroying forests. — Chris Wiedemann, Ronkonkoma, NY

Though it has not received a lot of press to date, the industry is on the case — in part for the sake of its own survival, and thanks to the hard work of a handful of green groups, guitar makers and wood suppliers.

In 1996, Gibson, one of the world’s premier guitar brands, became the first in the industry to make some of its instruments using wood certified as “sustainably harvested” by the non-profit Forest Stewardship Council (FSC). By 2006, some 42 percent of the wood purchased by the company for its Gibson USA electric guitars came from FSC-certified sources. By 2012, Gibson expects to increase that to 80 percent.

Gibson isn’t the only instrument maker greening up its footprint: Taylor, Fender, Martin, Guild, Walden, and Yamaha, along with Gibson, have signed on as partners with the Music Wood Coalition, a project of the environmental non-profit Greenpeace. The coalition, which is also made up of a half-dozen tonewood suppliers, hopes its efforts will protect threatened forest habitats and safeguard the future of trees critical in manufacturing instruments of all kinds. Eco-advocates and guitar makers alike fear that the spruce, maple, mahogany, ebony and rosewood trees that have been the foundation of the wooden instrument industry for years are being cut down faster than they can be replaced.

The coalition’s initial focus is on halting the aggressive deforestation going on in Southeast Alaska. Greenpeace has been in talks with Sealaska Timber Corporation, one of the biggest logging operations in Alaska, to get 190,000 acres of the company’s privately owned Southeast Alaska timberland — a prime source of Sitka spruce, a wood coveted by instrument makers for its use in guitar soundboards — certified by FSC. Greenpeace Forest Campaign Coordinator Scott Paul views getting these forestlands certified as an important win-win opportunity for Sealaska, which wants to maintain a viable income stream, and for instrument makers who need a dependable source of resonant, durable and beautiful woods.

“These [private] lands are going to be logged,” says Paul. But with FSC oversight, he says, the forests can be managed sustainably. And the process is already underway, with the first part of the two-step certification process already completed. “Our goal is to create a demand…for FSC certified ‘good wood’ as the only acceptable music wood from the North American coastal temperate rainforest,” adds Paul.

Guitar makers know that the woods they’ve used for years might not continue to be had at the quantities and low prices they’re used to, but they are willing to adapt: “Alternative woods are the key to successful guitars,” says Bob Taylor of Taylor Guitars, which has been a pioneer in the use of exotic and sustainably harvested tonewoods in their high quality acoustic guitars. “But the market needs to go there all together.”

Tradition is a huge driving force, agrees Paul. “Players expect a spruce soundboard, a mahogany neck, an ebony, or rosewood bridge.” There needs to be a leap of faith in changing markets, he says, where people are becoming more environmentally conscious.