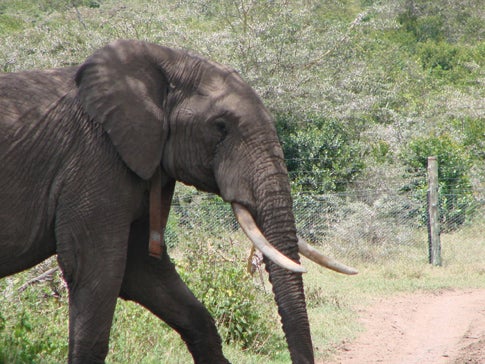 If the Kenya Wildlife Service starts running up its text-messaging charges, it has 44 elephants to blame. Rangers in Kenya have outfitted elephants with cellphone- and GPS-equipped collars that send warning messages when the pachyderms are about to raid farms.

In 2006 the rangers tested the collars on a repeat offender named Kimani, who had broken through electric fences 20 consecutive nights and caused thousands of dollars in damage to crops and farm equipment. “Most farmers have no idea that their field is being raided until the damage is done,” says Jake Wall, a software programmer for the Save the Elephants Tracking Animals for Conservation program. Now Kimani’s collar texts his hourly position to a server in Nairobi, where Wall’s AnimalLink software compares the animal’s location with a database of virtual borders established around villages and farms. If Kimani strays across one of those borders, the system alerts researchers and rangers in the area so they can coax him away from trouble. “For every elephant we’ve collared, there are 20 more that also raid crops,” Wall says. “We hope that curbing the behavior of the major troublemakers will rub off on the other elephants.”

So far, the system has helped rangers nab Kimani and 43 recently collared elephants before they raided farms, but it was unable to protect three of the collared animals from poachers. Elephants generally sleep fewer than four hours at a time, so Wall is upgrading the software to send out a warning text if an animal hasn’t moved for five hours, which could help rangers catch poachers in the act.