The Science of Survival

A traveling exhibit predicts the future 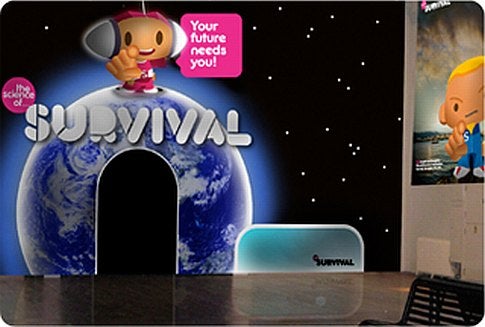 Buz, Eco, Tek, and Dug (the orthography of the future is apparently destined to be streamlined) each have unique views on how the human race can best careen forward. And they each have an “S,” presumably for Survival, on their futuristic garb.

Buz is the ponytailed, eyelash-laden black chick who cares about community. The rest of the gang is also well-intentioned, and white. (Not exactly reflective of the diversity of the under-13 population streaming off school buses into the Liberty Science Center in Jersey City, N.J.) Eco is, you guessed it, the “green” guy, complete with baseball cap and a touch of self-righteousness. Tek [sic] delivers her spiel in bits and bytes and wears a perma-antenna, a hot pink spacesuit, and earphones that make her look like an egghead. Dug is the slow-moving blonde dude who abides by innovations of the past. (Anyone with a goatee/soul patch in 2050 can’t be too up-to-the-moment.)

Here’s what they sound like in the video at the entrance to the exhibit:

The Survival Guides are fun, lovely little chaps who punctuate The Science of Survival (developed at the Science Museum of London in conjunction with an intellectual property management firm) and lead visitors through areas dedicated to Eating, Drinking, Enjoying, Moving, and Building. (Apparently 40 years from now the gerund will have completely taken over.) 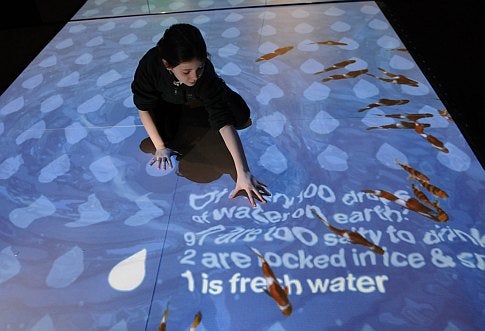 Water, water, everywhere, but not a drop to touch

Their competing agendas make for a lively show, but the give-and-take eclipses the real decisions — and consequences — at play. Or perhaps I’m too advanced in age to catch on to the wave of the future.

The cutesy high-tech environment hints at another important “S” word on our collective horizon: scarcity. The exhibition focuses on the need to conserve and alter our behavior, but the abundance of sound, light, and razzmatazz makes it hard to envision a world without glitz, glimmer, and flat screens, never mind shortages of food or potable water.

The idea is that we’ll have to make changes, and perhaps even suffer (another “S” word) a tiny bit, is an underlying theme, but one that isn’t quite tangible. Maybe I’m too rooted in the past, like Dug, but my favorite parts of the exhibit were the things I could touch. The Q Drum of South Africa and the Whirlwind Wheelchair made in Vietnam hint at low-tech, hands-on solutions that harness ingenuity and are easy on the environment. But they were each bolted to pedestals a few feet off the ground, making it tough for kids to reach them.(Or perhaps that was the point.) Ditto some of the cool building materials in the last part of the show.

Here’s what I experienced in the Building area:

Nonetheless, The Science of Survival has plenty of redeeming features and opportunities for learning. I grooved on tactile examples of flooring made of recycled bamboo and countertop materials created from used flip-flops, and the subtle messages contained therein. (Guess what, kids? In the future you may not be able to throw out your flip-flops and get a new pair when they break. You might have to fix them and keep on wearing them, like kids in developing countries do right now.) And, oh yeah, some of those dire gloom-and-doom scenarios predicted for four decades from now — housing shortages, lack of clean drinking water, food crisis — umm, they’re already in effect right now. 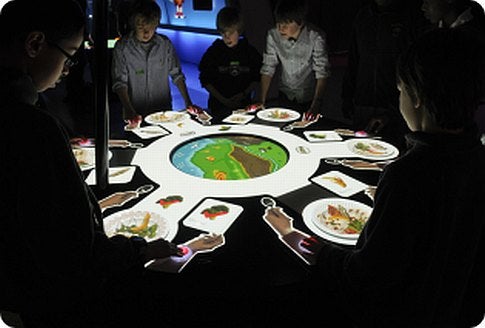 This exhibit might not be the jewel (or rather the flashing LED) in the crown of the Liberty Science Center, but the place is still worth a visit. The building commands stunning views of New York Harbor and lower Manhattan (and the back of the Statue of Liberty), and other in-house exhibitions offer close-up, personal, and touch-rich opportunities to cozy up to the Hudson River and examine human communication (turns out some of them involve speech, touch, and other languages, like Arabic, which I had a chance to practice and record in a video booth).

The exhibition is appropriately short on swag (I’ll let them have a solar-powered radio and a penguin-shaped flashlight that can be powered by hand). But don’t worry, gastronauts, the gift shop does offer two kinds of freeze-dried (a.k.a. “astronaut”) ice cream. Stock up, because in the future we might not be able to have our cake and eat it too. In the meantime, here’s what happened when I tried my hand at the interactive “food of the future” game:

Luckily, there’s a handy cardboard-covered (percentage of post-consumer content unknown) Survival handbook that highlights important themes and tough questions. The 20-page booklet asks kids to identify what they’d like to protect and what they’d like to challenge. And it introduces them to some common-sense solutions that they might find in a housing module near them: a bicycle, a solar-powered charger, and a toilet-lid sink that fills the tank with water left over from handwashing.

The show runs now through April 26, 2009 at the Liberty Science Center in Jersey City, New Jersey.