Powered by Sun, Wind and Sea

The biggest renewable energy projects of 2009 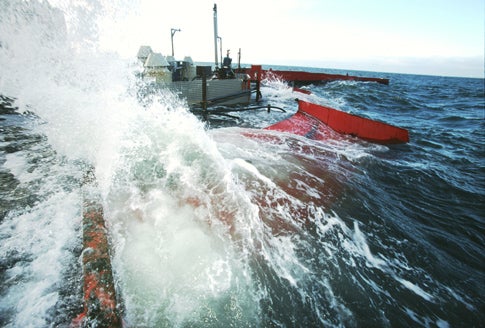 These three projects will harness natural resources to powerful effect.

Hull, Massachusetts
This resort town, population 11,000, plans to moor four 260-foot-tall turbines a mile and a half offshore, at a total cost of $40 million. Along with Hull’s two existing onshore turbines, wind power could generate 14 megawatts, enough to supply energy to the entire community.

Mojave Desert, California
This fall, construction begins on a five-square-mile stretch of heliostats, small moveable mirrors that follow the sun’s rays and reflect them onto a boiler on top of a central tower. The sunlight heats water inside the boiler’s pipes to temperatures above 1,000°F, creating steam that generates electricity in a nearby turbine. By 2011, the plant will produce its first 100 megawatts.

Pembrokeshire, Wales
As part of the U.K.’s goal of running on 10 percent renewable energy by 2010, this summer Wales will install a Wave Dragon converter, the world’s largest wave-energy generator. The 980-foot-long device captures waves in basins. When the water rushes back into the sea, it spins turbines, producing seven megawatts of electricity.