Obama’s Green Team: Who They Are and What’s Next 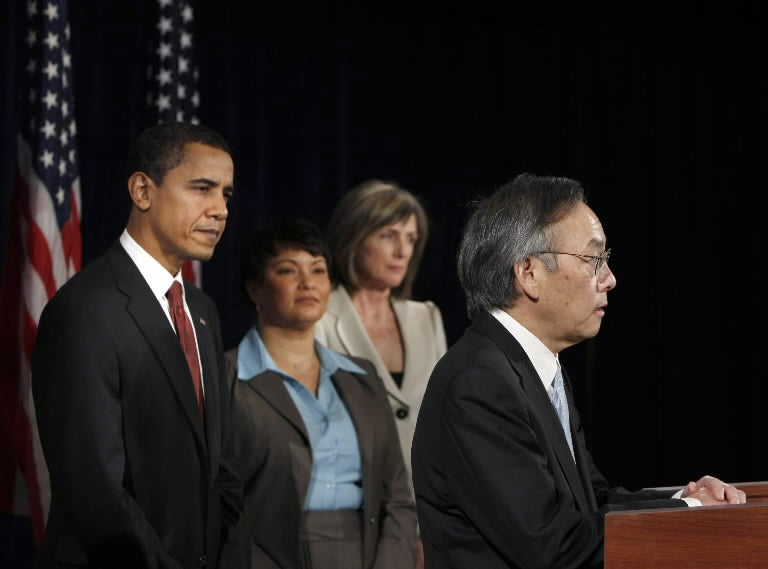 Call it the “green” team or even the “dream” team, but what environmentalists can now say with affirmation is that change really is here. President-elect Barack Obama’s picks for his administration’s green team are among the best and brightest scientists and advocates of environmental change.

Director of the Lawrence Berkeley National Laboratory and Nobel-Prize winning physicist Steven Chu was named Secretary of Energy; Chief of Staff to the Democratic governor of New Jersey and state environmental official Lisa Jackson is to head the Environmental Protection Agency; former EPA administrator during President Bill Clinton’s years Carol Browner will take on a newly appointed position in the White House as energy and environmental policy “tsar”; Los Angeles deputy mayor for energy and environment Nancy Sutley will chair the White House council on environmental quality; and, in the latest news, Colorado senator and attorney Ken Salazar, whose expertise is in water law, is expected to lead the Interior Department, where he would have a say in policies in oil and gas drilling among other resource extraction methods on public land.

A Team of Innovation
“It’s clear that President-elect Obama is banking on innovation as one of our solutions to our energy crisis and these choices are an indication of it,” says environmental policy expert Steven A. Cohen, who is the director of Columbia University’s Master of Public Administration Program in Environmental Science and Policy in the School of International and Public Affairs and the executive director of the university’s Earth Institute.

Take for example, Chu, who’s the first Nobel laureate to be appointed to a presidential cabinet, or even Browner, whose new position signals the first time a President will have someone on his staff in the White House to oversee environmental and energy policies.

But regardless of titles, Obama’s choices also represent a range of voices and experiences that will add to the rich debates to come on policies.

Nancy Sutley is “a voice we haven’t had in environmental debates,” says energy expert Stephen A. Hammer, director of the Urban Energy Project at Columbia University’s Center for Energy, Marine Transportation and Public Policy.

Hammer, who researches and supports energy policymaking efforts in cities, takes a particularly liking to Sutley. She has had more than 10 years of experience in senior environmental, energy and water policy-making positions in California. It’s her experience with cities that make her a choice candidate, according to Hammer.

Federal and state policies do not always work on a local level, he says, and to have somebody on the team who can provide a direct local perspective will play an essential role in creating effective policies.

“Historically cities have not been part of the energy policies discussions and that will change now,” says Hammer.

The Voice of Science
Having someone of Chu’s caliber and background in the team brings “science back in the forefront of energy,” explains Hammer.

“I think in the past, people would generally argue that energy policy has been driven by politics.”

Many would agree. According to the Los Angeles Times, critics like former EPA Administrator Christie Todd Whitman have accused the Bush administration of allowing lobbyists and ideologues to influence the decision-making process of policies.
Not only have numerous democrats, such as Rep. Henry A. Waxman of Beverly Hills, openly accused the Bush administration of manipulating scientific processes and suppressing scientific knowledge in favor of political and corporate interests, but they also point to top officials, such as Vice President Dick Cheney and political advisor Karl Rove, and accuse them of pressuring federal agencies to support positions that alienate scientists.

Yet it’s been more than Bush’s eight years that energy activists have been waiting for somebody to treat renewable fuels seriously, says Hammer. That last time could stretch back to Jimmy Carter’s administration in the 70s, which created the Department of Energy, poured billions into energy research and development, implemented the first efficiency standards for appliances and advocated renewable fuels, from biodiesel to solar power.

There was an abandonment of Carter’s strategy in the Ronald Reagan administration though that soon followed. Now, we are coming back to a point where science is getting the place it deserves in the administration to push the green agenda forward.

The Economic Crisis and the Green Agenda
The financial crisis that has gripped the nation, however, could make the plan to pursue renewable energy hard to follow, some say. Hammer thinks it might be hard to follow through immediately on Obama’s plan, but that investments could still be made in a basic energy infrastructure.

“You can’t have economic control in the long run without sustainability,” argues Cohen, who believes the two are interconnected and that policy makers need to recognize this. Cohen adds that spending money on the green agenda can help stimulate the economy.
In order to stimulate the economy and create jobs during the Great Depression, says Cohen, they did things like build schools and parks to develop the nation’s infrastructure. The modern version of that in our economic times is to spend money on research and development to modernize our own use of energy, such as by deploying smart grids and delivering other renewable technologies.

It’s a viewpoint, Obama shared during a press conference announcing his picks. “We can seize boundless opportunities for our people,” said Obama. “We can create millions of jobs, starting with a 21st-century economic recovery plan that puts Americans to work building wind farms, solar panels and fuel-efficient cars.”

It is clear Obama’s team could do just that.

What Next?
If the green team is approved by the senate, a lot more work still lies ahead.
“It’s been a rough eight years, so [the team] needs to boost morale in each department,” says Cohen. Also, he adds, it “needs to bring into the government people who have been energized by Obama.” Those from universities, businesses and especially community based organizations, who are ready to take their work to the federal level.

Hammer predicts that Obama’s team has the opportunity to also push for a Federal Block Grant Program designed to help cities develop energy strategies that congress has not funded that so far.

Under the new administration’s team, Hammer expects to see a new Renewable Portfolio Standard (RPS) and different types of tax credits that will provide incentives to the private sector to invest in renewable energy technology. For instance, tax credits that are only 12 to 24 months make it hard for certain technology sectors to make investments if they don’t think money will be there down the line, so multi-year tax credits would provide more of an incentive for investment, he says.

There are plenty of expectations. But environmentalists all agree on one thing. As Hammer puts it: “We are all very excited about what the future holds.”