The cause of the sudden beachings remains a mystery 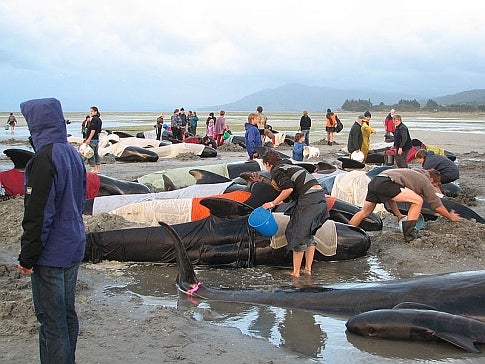 For the second time in only two weeks, a large group of long-finned pilot whales has died after stranding themselves in a rocky area known as Sandy Cape on the remote western coast of Tasmania, Australia. On November 29, more than 150 whales died, turning the waters of the Indian Ocean red when they suffered deep cuts after being battered by rough surf and thrashing against jagged rocks.

Due to the area’s remote location, rescuers were unable to reach the scene until a day after the stranding was reported. Still, they managed to save 32 whales with the help of a local fisherman who used his boat to herd the whales back out to sea. The dead whales were left to decompose naturally.

Just one week earlier, more than 50 whales died after becoming stranded on another nearby beach. Because Tasmania is along the whale migration route to and from Antarctic waters, strandings there are not uncommon. According to Tasmania’s Department of Primary Industries and Water, 75 whale stranding incidents have occurred since 1900, several of which involved more than 200 animals.

Pilot whales are among the most social marine mammals, often traveling in pods that include hundreds of individuals. Although these strong social bonds help the whales survive, their herding behavior can also lead to their demise — as one whale emits a distress call that prompts the other members of the pod to follow. Some scientists believe that the whales become stranded when they are forced to chase prey too close to shore. Predators like killer whales can also cause “panic” within a whale pod, disorienting them and “herding” them towards the shoreline. Other researchers have suggested that the whales’ echolocation system may not detect gently sloping coastlines. More controversial theories attribute whale beaching to military sonar and changes in the Earth’s magnetic field, which could interfere with the animals’ ability to navigate. But none of these theories have yet been proven, and the reason behind mass whale strandings is still a mystery.