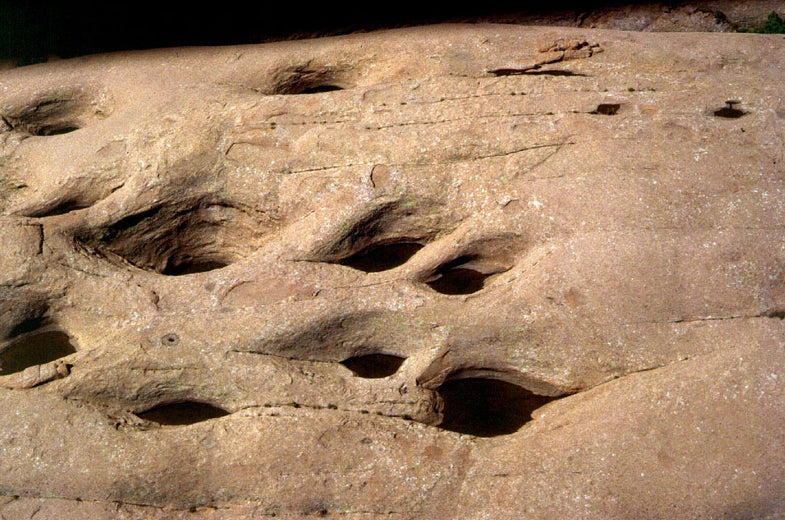 Four scientists are now disputing the recent discovery of rare dinosaur tracks in a remote area near the Utah-Arizona border. According to the original study, which was published in the October issue of the paleontology journal Palaios and widely reported around the world, a large concentration of dinosaur tracks and rare tail-drag marks was found in a dinosaur “trample surface” in the Vermilion Cliffs National Monument. But Brent Breithaupt of the University of Wyoming Geological Museum, Alan Titus and Rody Cox of the U.S. Bureau of Land Management, and Andrew Milner of St. George Dinosaur Discovery Site at Johnson Farm believe the dinosaur tracks are actually just sandstone potholes, created by erosion and weathering.

Millions of years ago, shifting sand dunes covered much of the western U.S. Over time, the sand dunes became the Navajo Sandstone rock, which is visible throughout much of the Colorado Plateau region today. Potholes are circular depressions in the sandstone carved by erosional processes, such as when pebbles or sand swirl in running water. They can look deceivingly like dinosaur footprints, which makes life complicated for scientists.

In their published findings about the discovery, University of Utah professor Marjorie Chan and graduate student Winston Seiler acknowledged that there are strong arguments for the features being potholes and not dinosaur tracks. In fact, the University of Utah press release on October 20, 2008 that announced the findings disclosed that one reviewer of the Palaios paper believed that the holes were erosion features. But because the holes exhibited many footprint features, and because they were concentrated along only one surface, Chan and Seiler argued that the impressions were made by dinosaurs.

Now, the two investigators have agreed to collaborate on a follow-up study with the four scientists who question the findings. “We gave the project considerable critical thought and came up with a different interpretation than the paleontologists,” said Chan. “But we are open to dialogue and look forward to collaborating to resolve the controversy.”

Debates over research findings and results are not unusual in the science world; in fact, according to the scientific method, results and findings must be reproduced by others in the scientific community to be confirmed. Seiler, whose master’s thesis work was based on the dinosaur tracks discovery, fully acknowledges that his interpretation is controversial and that further study is warranted, saying that if the paleontologists’ skepticism turns out to be justified, “that’s part of science.”