A new study, which could help scientists model global change more accurately, finds that typhoons bury tons of carbon in the oceans 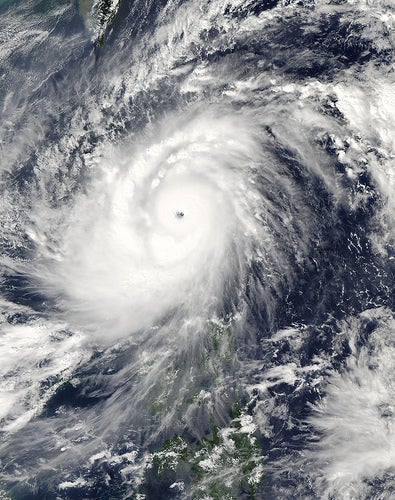 When typhoons and hurricanes sweep through mountainous areas, they cause more than human destruction. They also physically and chemically weather the mountains they pass, taking carbon with them and burying it in the oceans in the form of sediment. This in turn allows the planet to cool. While scientists have long predicted that extreme storms cause such effects, only recently have they been able to measure just how carbon much storms take away: tons. Researchers from Ohio State University who measured carbon while a typhoon was passing through in full force in Taiwan—essential since sediment washes away very quickly after a storm—found that more than 400 tons of carbon was being swept away for each square mile of watershed during the storm. A single typhoon in Taiwan, they determined, buries as much carbon in the ocean as all the rains combined in the country for that year.

Although the findings are preliminary and the carbon buried by storms won’t alleviate global warming, the data could still be useful to scientists as a benchmark to calculate the Earth’s carbon “budget,” which is how much carbon is added and removed from the atmosphere overall. Right now, those numbers could be way off if accurate carbon data from storms are not considered.