Pond Scum for a Cleaner Tomorrow 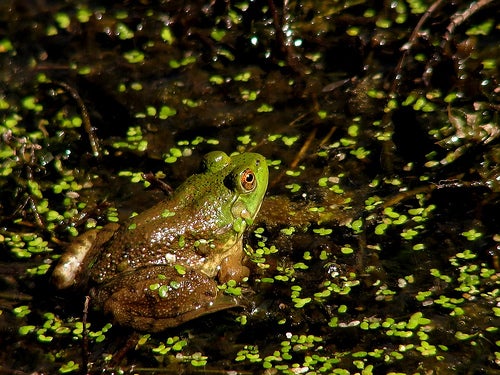 Biologists at the Waksman Institute of Microbiology at Rutgers University have a strange fascination with pond scum. But the fascination may prove more useful than anyone could have imagined.

Most recently, the aquatic plant duckweed has gained attention after being targeted as a possible source of biofuel (not unlike that other pond-choking stuff). But that’s just one of the potential applications scientists at the five allied institutions have been uncovering. Thanks to its high nutritional value, duckweed holds promise as a livestock feed, one that’s more sustainable due to its ability replenish itself relatively easily (duckweed creates biomass faster than any other flowering plant). It’s also being tapped as a means to extract nitrogen and phosphate pollutants from sewage and agricultural wastewater.

Abundant throughout the world, duckweed can be found through North and Central America, Europe, Africa and Asia in fresh water ponds, marshes and streams. Each frond absorbs nutrients through the entire plant, not a central root system like a plant that grows in soil. Because the body of duckweed is composed of metabolically active tissue, photosynthesis is dedicated primarily to producing proteins, which gives the plant its high nutritional value. It’s also the smallest plant to bear fruit, each of which is about 1.5 mm wide.

The merits of the plant must have been persuasive, because the U.S. Department of Energy’s Joint Genome Institute recently selected duckweed for genome sequencing as part of its 2009 project portfolio.

Who knows what further research will bring? In the future, if anyone says you’re pond scum, you may be inclined to thank that person and be on your way.