The cetaceans aren't to blame for declines in fish populations, according to new reports by conservation groups. 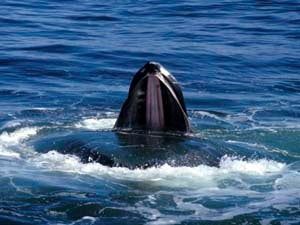 Whalers in Japan, Norway and Iceland claim that whales are eating fish that might otherwise provide food for humans. Killing whales means more fish for people to eat—in fact, it’s a matter of food security for developing countries, the argument goes.

Not so, say representatives from Humane Society International, World Wildlife Fund and the Lenfest Ocean Program. At this week’s meeting of the International Whaling Commission in Santiago, Chile, the three conservation groups presented reports debunking the notion that whales are taking food out of the mouths of poor people.

One of the reports studied coastal fisheries in Northwest Africa and found that great whales spend only a few months in that area during their global migrations, and typically eat prey that fishermen can’t—or wouldn’t want to—catch. And even in places where whales do eat the same type of fish as humans, removing whales wouldn’t necessarily increase the amount of fish available because other predators would probably pick up the slack, according to the report by Wilf Swartz and Daniel Pauly of The University of British Columbia Fisheries Centre.

So, why are fish stocks in severe decline? The conservation groups say it’s because of over-consumption by humans, not whales. Affluent humans, that is. Less than half the fish caught in the South Pacific, Caribbean and West Africa (where some countries are calling for increased whaling) end up on local plates; most are sold to markets in wealthier nations, according to data from the United Nations Food and Agricultural Organization.