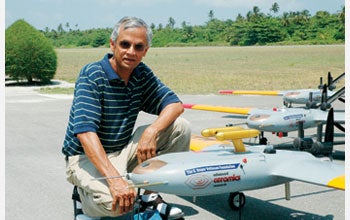 A team of scientists led by V. Ramanathan of the University of California, San Diego have begun using autonomous unmanned aerial vehicles, or AUAVs, to study the link between air pollution and climate change. While some of today’s top robot drones are operated via remote control, this new fleet of eight-foot-long, sub-50-pound Manta AUAVs fly all on their own.

Ramanathan and his team used the vehicles to study brown clouds, which are created when power plants, cars, factories and other sources pump enormous plumes of pollution into the atmosphere. Ramanathan’s group did their work in the Maldives, where dirty air generated in the Indian subcontinent looms overhead. The Manta planes, which can fly as high as 15,000 feet and stay in the air for hours, measured solar radiation, the size of cloud drops, turbulence, humidity, temperature and more.

Next up: The group plans to use the planes to study atmospheric pollution near LA, and off the coast of China.