The Arctic animal's habitat is melting. 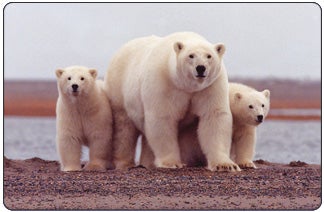 It’s official: polar bears are in trouble. Secretary of the Interior Dirk Kempthorne has announced that he is accepting the recommendation of the U.S. Fish and Wildlife Service to list the polar bear as a “threatened” species under the Endangered Species Act. That means the bear is just one step from becoming “endangered,” a category reserved for species on the brink of extinction.

Kempthorne’s decision to list the bear is based on studies that show a severe decline in Arctic sea ice over the last decade, along with computer models that predict continued melting. Polar bears travel across sea ice to hunt for seals and other prey, and are likely to starve if these frozen hunting grounds disappear.

Today’s announcement is an acknowledgement by the Bush Administration that climate change is putting wildlife in peril. However, the issuance of the listing does nothing to stop the melting of the Arctic ice cap. Nor does it guarantee the survival of the polar bear.

Kempthorne said that although he is compelled by law to list the polar bear as threatened, he is taking administrative and regulatory action to limit the scope of his decision so that the Endangered Species Act “isn’t abused to make global warming policies.” Meanwhile, Republicans in the Senate made another unsuccessful attempt yesterday to open the Arctic National Wildlife Refuge to oil drilling.