The Killer Mice of Gough Island 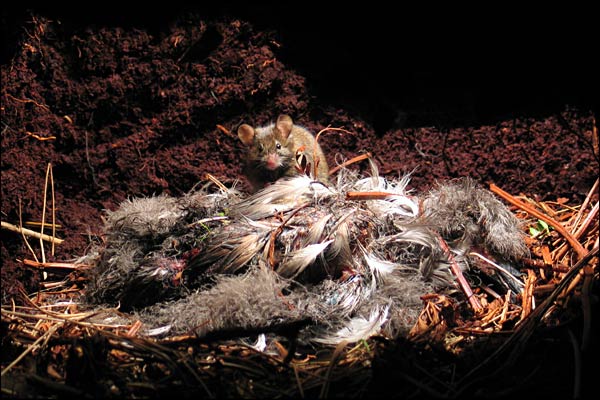 Widely recognized as the most important sea bird habitat on Earth, Gough Island is a geographically perfect place for the animals to raise their young. It is one of the most remote places in the South Atlantic, nearly 2000 miles from both Africa and South America and 220 miles from the next nearest island in its archipelago. It is this isolation which has allowed its ecosystem to remain a nearly perfect home for the 22 bird species that seek its shelter in order to breed. But it is not wholly unspoilt: sometime in the middle of the nineteenth century when whalers came ashore, a few tiny house mice scurried off the ships and made Gough Island their home.

You wouldn’t think a house mouse would be any trouble on an island in the middle of the ocean, and you might be right in that assumption. But you also wouldn’t have expected the mouse to evolve so quickly as to have grown to two to three times its usual size and to have developed a taste for bird chicks. That’s exactly what has happened on Gough Island—the same absence of predators that has allowed sea birds to thrive unharmed has allowed the giant mouse population to balloon to nearly three quarters of a million.

The mice attack at night, gnawing through nests and straight into the living chicks, who are essentially helpless mounds of fat. Their parents are equally unable to fight them off, having no biological experience with predators. The mice (now thought to the largest species of mouse anywhere) if left unchecked, are poised to bring several of these most rare bird species to extinction.

The only current plan to attempt an eradication involves dropping thousands of tons of rat poison from the air in the hopes that the mice will take the bait and retreat to their nests to die. New Zealand has had success controlling rodent populations this way on several of its islands.