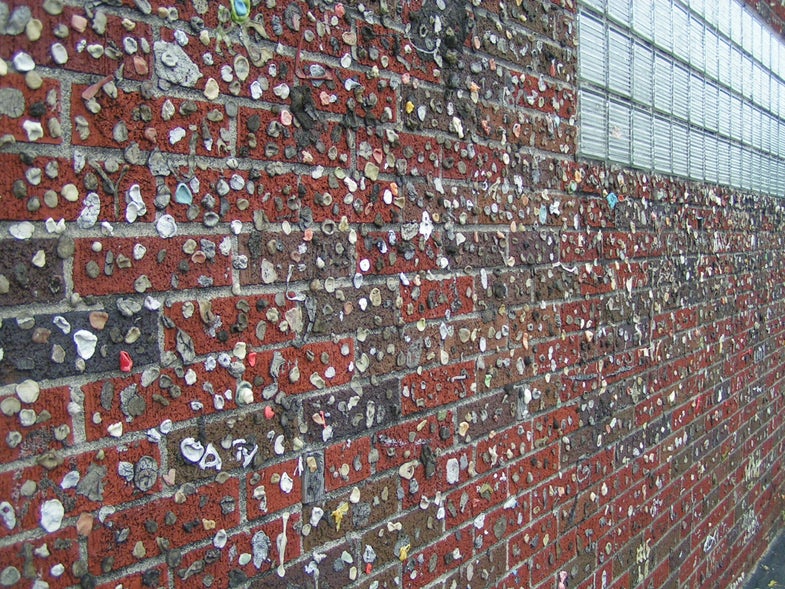 If you live in a major metropolitan city, you’ve perhaps noticed that the sidewalks are covered with black dots the size of quarters. I remember it took me a few months after moving to New York City to figure out that was gum. After it’s spit out, it gets stepped on and flattened to the concrete. In no time at all it accumulates the ebony patina of city grime. Sprinkling the sidewalks is easy. Removing the tarred, synthetic rubber is the hard part. If you’re talking about one chewed stick in a school hallway, it’s a can of solvent and a putty knife away from coming off the floor. But when you’ve got miles of city walkways to clean, you need something better.

Currently, the options are high pressure steam or highly corrosive chemicals, neither of which is very cheap or easy to use. So a team of Manchester University researchers have been working on finding a new solution that would be relatively inexpensive and safe for the environment. The answer they’ve come to is enzymes. Enzymes are molecules which break up long chemical chains. (We’ve got enzymes in our saliva that start the digestive process.) The only trouble has been in how to deliver them. Because gum is a kind of synthetic rubber, it repels water, so the removal agent needs to be suspended in some kind of solvent.

The mixture they’re currently at work on uses a substance known as an ionic liquid, which is basically molten salt. The salts they’ve been testing have very low melting points and are biodegradable, unlike the more corrosive alternatives. They believe they’re about a year off from getting it right and bringing the product to market.