Why Trashing the Oceans is More Dangerous Than We Imagined

Degrading plastics may cause serious toxic risk to ocean dwellers and, eventually, us 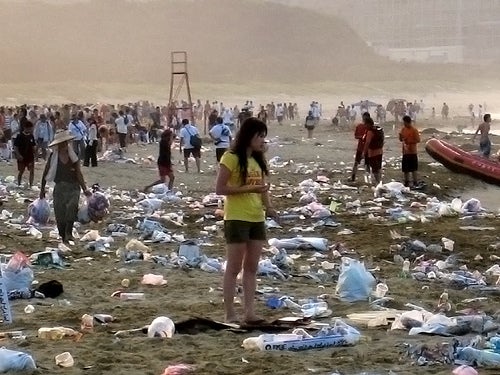 Last fall we reported on the growing mess of garbage swirling in the North Pacific Gyre. It’s a swath of ocean arguably the size of the continental U.S. where all the plastic refuse from Asia and the western coast of North America ends up when it’s washed out to sea. Turtles mistake bags for jellyfish and birds mistake floating chips for prey. Animals have been discovered starved to death because the entire contents of their stomachs were plastic fragments. Sail a boat out to the middle of the gyre and the problem is in plain sight. Unfortunately for us, the more severe problem is the one we can’t see.

Plastics don’t biodegrade like organic matter, which means they can’t be converted by living organisms into useful compounds for life. Instead, they photodegrade, a process by which photons from the sun’s rays pulverize the plastic polymers until they are broken into individual molecules. Even when they have been smashed into the tiniest bits physically possible, they are still plastics.

What’s worse, the plastics act as a kind of magnet for toxins in the water, accumulating chemicals on their surface. The worry now is those toxins will be transferred to the bodies of the animals eating the debris.

Already, British researchers have discovered that in a “typical sample of the sandy material gathered” along shorelines, one-quarter of the weight may be plastic particles.

The trouble for us comes when those polymers enter the food chain. Jellyfish are already mistaking the non-microscopic bits for zooplankton. Larger fish eat the jellyfish and so on up until you’re eating a tuna filled with plastic dust and toxins.