Turning an Ant Into a Berry 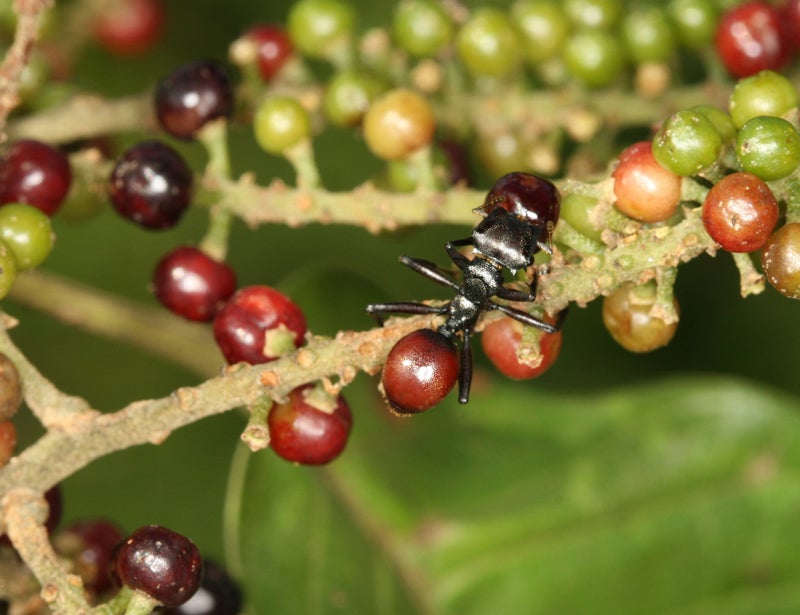 As the worms lay their eggs inside the ant, it’s gaster is stretched until it resembles a berry that’s attractive to birds.

Parasites are well known to have evolved an exceptional array of strategies for perpetuating themselves. A microscopic tropical nematode worm which lives in the gasters of ants in Panama is one of the more impressive. Researchers at the University of Arkansas have recently illuminated its method, which manages to make the ant appear to be a fruit so that it will be eaten by birds.

The worms begin their life cycle as eggs in the feces of birds. The ants forage on that feces for its mineral content, bringing samples back to their colonies to feed their young. The ant larvae have no defenses against the worm and so the eggs hatch inside them and the worms live out their lives in the end segment—called the gaster—of the ant’s body.

This is where the worm’s evolutionary sleight of hand comes into play. As the worms lay increasing numbers of eggs, the outer layer of the ant’s gaster—which is regularly black—is stretched thin so that it becomes translucent. In the sun, it appears to be a red berry. Birds are then attracted to eat the ants and by consequence consume the worm eggs inside as the entire cycle begins again.