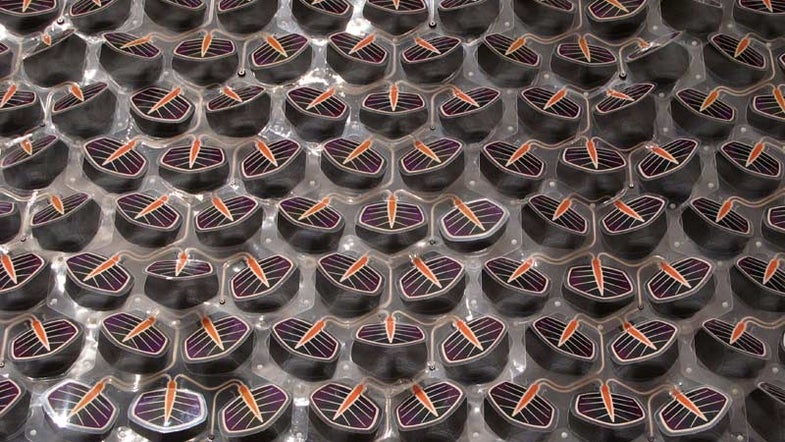 We’ve been talking a lot lately about new designs in solar panel technology. Today’s panels divide into two groups: the old-school silicon and glass box and the newly emerging thin film solar sheets, now being offered by several companies. What we haven’t yet looked at is how the thin film technology can be used to make a solar installation that isn’t staid and wholly utilitarian. Enter Teresita Cochran, a graduate of both Rhode Island School of Design and New York University’s Interactive Telecommunication Program. She’s heading a start-up called SMIT to bring an elegant and visually stunning solar array to market.

At the heart of the SMIT system are solar “leaves”—thin, fist-sized panels, attached to a steel mesh so that they overlap slightly and mimic the effect of sequins on a dress. Not only do they twist in the wind, but the framework on which they are mounted allows for climbing plants to grow underneath. The panels themselves can be manufactured with varying levels of opacity to manage light and heat transmission into the building. They’re also individually replaceable, which should theoretically give this system a longevity advantage over other less modular systems.

Since the project is still a prototype, there is no word yet on its efficiency in comparison to an unbroken thin film over the same coverage area. Still, the visual appeal will likely be enough to win converts less concerned with maximum collection.

For those living in New York City, the original is currently on exhibit at the MoMA as a part of the Design and the Elastic Mind installation, now through May 12.