Scientists Weigh in on Biofuels vs. Food Debate

With debate raging on whether biofuels are robbing the world's hungry of food, scientists and engineers at the first annual BioMass conference in Minneapolis say it ain't so 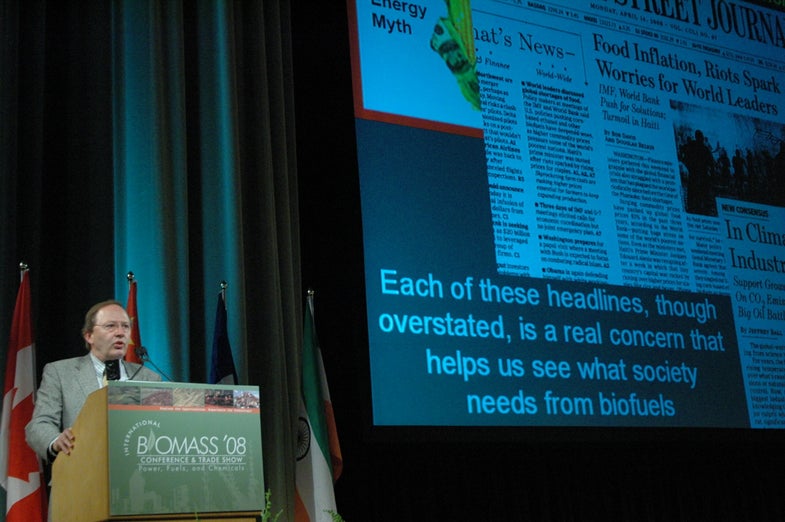 Prime on the agenda in the opening session this morning was a question lately blaring from headlines, for instance in a story in today’s New York Times: can we grow crops for converting into fuel without catastrophically upsetting the world’s food supply?

The answer is an unqualified “Yes,” says David Tilman, ecology professor at the University of Minnesota and one of this morning’s speakers. He deplored the polarization of the biofuels debate, pointing out that that biofuels were first touted as a savior a couple of years ago, with public opinion shading into doubt not long afterwards, and now in full-swing backlash mode, with people like the United Nations special rapporteur for the right to food, Jean Ziegler, calling biofuels “a crime against humanity” because it takes food out of the mouths of the hungry according to today’s Times.

What’s needed instead, says Tillman, is a rational look at the big picture, backed by good science. Yes, he acknowledges, the demand for biofuels derived from traditional food crops like corn has contributed to a rise in global food prices, but so has increasing demand for food from burgeoning populations in China and India.

More to the point, though, is the mistaken notion that we have to use food crops for fuel production. In test fields in Minnesota, Tilman and his colleagues have found that the best energy yields actually come from native prairie grasses, not corn or soy. And, said Tilman, “there’s a surprising benefit from the mixture of species. Farmers know this from growing pastures. Nobody plants a pasture of a single species. They put out a variety of grasses, legumes…and so on. They do that because that gives them a higher yield.”

What’s that mean for energy? “We see here we get 238 percent more energy per acre of land that we can harvest mowing this hay in the autumn by growing a high diversity mixture of species than we can get on average by growing any one of those species by itself.”

Tilman’s test plots were “on land that is incredibly unproductive, with very infertile soils… We did not fertilize it, we didn’t water. We put out high diversity native prairie, let them grow….” And energy production from the harvest went through the roof. “Another thing which happened which really surprised us is that we have a lot of carbon being stored in those soils.”

So, growing inedible biofuel crops on otherwise unproductive farmland not only will ease the current pressure on food crops exerted by biofuels, but will also help remove harmful CO2 from the atmosphere. Seems like a win-win.