The Risks of Geoengineering 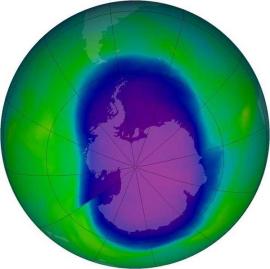 When it comes to climate change, a quick fix won’t do. Science published a paper Friday from the National Center for Atmospheric Research (NCAR) which concludes that a proposed plan to inject the atmosphere with sulfate particles in order to cool the planet would actually have dire consequences.

According to the NCAR study, this geo-engineering strategy could lead to the destruction of at least one-quarter, and potentially three-quarters, of the ozone layer above the Arctic Ocean, and could delay the expected recovery of the Antarctic ozone hole by 30 to 70 years. “Our research indicates that trying to artificially cool off the planet could have perilous side effects,” says NCAR’s Simone Tilmes. “While climate change is a major threat, more research is required before society attempts global geo-engineering solutions.”

Yes, but let’s not stop the good ideas from flooding in. Here are some other tech-based schemes to save the planet.

This study marks the second time the ozone layer has factored in to recent climate change research—last week, we reported on a joint NASA/NOAA/University of Colorado study linking the regeneration of ozone with increased warming in the Antarctic.