What to do with energy-draining server farms? A few creative minds tackle the problem in unlikely ways 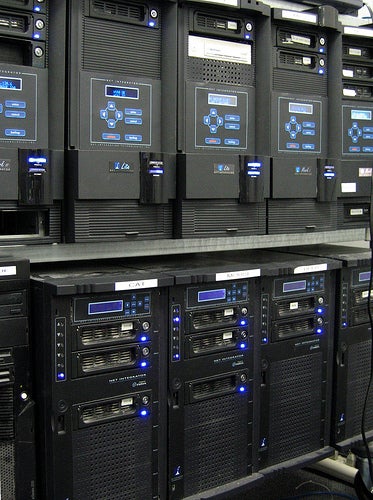 Is there an easy solution to this power draw? This photo was shared under the Creative Commons Attribution-ShareAlike license. Simon Law
SHARE

While computing power consumption is not at the top of the list of the most egregious energy drains, it is a large enough source on the grid that it warrants creative thinking, especially in the context of server farms. Not only are server clusters a more concentrated power draw than individual computers, but the energy needed to house and cool them is a significant source in and of itself. Two new ideas—one in theory and one in practice—aim to address these questions with novel solutions.

Server centers need constant cooling to keep processors from overheating. Usually the resulting heat is vented outdoors and wasted. The first idea, in practice at a new IBM data center in Switzerland, captures the hot exhaust produced by the air conditioning system and routes it through exchangers to warm water for a nearby town pool. While the city helped pay for the system, it will get to use the heat for free.

The second idea comes from Andy Hopper, a Cambridge University computing professor. His idea is to physically relocate server farms close to sources of alternative energy. While subscribing to wind or solar power decreases reliance on fossil fuels, a lot of that energy is lost as it is moved throughout the power grid. By concentrating high-consumption computing clusters near the source, they’ll most efficiently take advantage of the clean power.

Neither solution is massive or mind-blowing, but they’re small enough to actually be implementable and both demonstrate a promising sort of innovation. Hit up the comments if you’ve got a like solution.