Do the tons of human-provided feed available warp birds' ecosystems 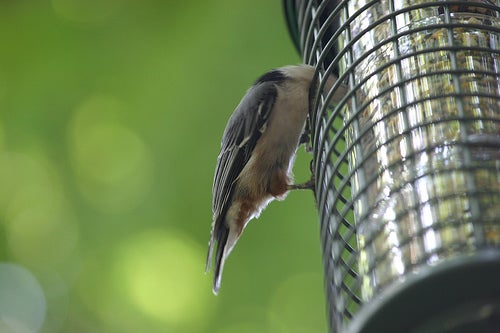 If you feed the neighborhood stray cat, he’ll keep coming back. He’ll remember your house as an easy source of food and won’t have to scavenge for as much garbage or chase down as many field mice. The same thing obviously applies to birds and bird feeders, just on a much larger scale. At that point—when hundreds of thousands, even millions of feeders are involved—what kind of effect does the feeding have on the animals’ natural ecosystem? That’s the question Gillian Robb and her team at Queen’s University Belfast in the U.K. set out to answer through an experiment of their own and a review of the existing literature.

As you might assume, birds receiving extra food fared better than their counterparts over the winter, mated earlier, and had more offspring. The downside appeared in one of the review studies in which a variety of jay was shown to have laid its eggs too early when the bird had eaten an abundance over the winter. Its chicks were then born before spring food was available. Another negative impact was observed not in the well-fed birds, but in the migrating species who return seasonally and have to compete with those animals who have over-wintered with great success.

So far, nobody’s calling for a nation-wide dumping of backyard feeders. The researchers admit that the work is incomplete and preliminary and that they are far from understanding the issue completely.