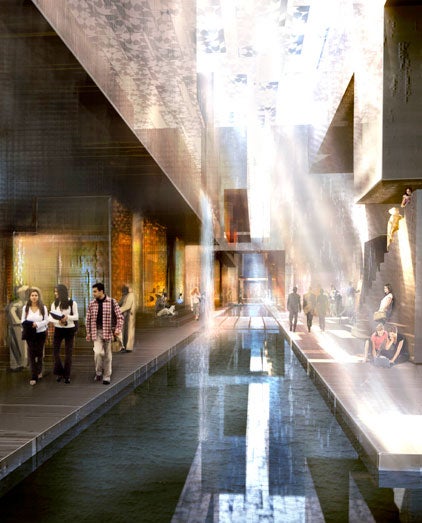 The narrow streets planned for Masdar City will keep the air from stagnating. Foster + Partners
SHARE

The United Arab Emirates is a small federation of seven states on the southern end of the Persian Gulf. Its reserves of oil and natural gas have allowed the nation to prosper economically. In recent years, the country has seen a boom in massive constructions: The world’s tallest skyscraper is scheduled to be completed in late 2008. Other superlatives include the world’s largest mall, an indoor ski slope and a series of man-made islands off the coast made from dredging hundreds of millions of tons of sand from the Gulf’s bottom. One of the reasons these projects have moved forward with such speed is the near total lack of environmental regulations in the U.A.E. states. Last month, a new project broke ground outside Abu Dhabi in the hopes of reversing that trend: Masdar City, the world’s first zero carbon, sustainable community.

Building a sustainable city is a formidable challenge, but building one in the desert, miles from the sea where there is no fresh water or soil to speak of is a challenge unto itself. A London architecture firm has been at work on the designs for the past year. The city will include low, clustered buildings cooled by wind towers oriented in a such a way as to give the right balance of sun and shade. The streets will be exceedingly narrow to keep the air from stagnating. Cars will be banned. Waste water and garbage is to be recycled. A light rail will shuttle residents from Masdar to Abu Dhabi.

It is an exceptionally ambitious project, but if any nation can do it, it’s likely the U.A.E: a country which has proven that ambitious projects are not insurmountable challenges. Still, whether this project is a serious look at sustainability or an exceedingly expensive public relations display remains to be seen.