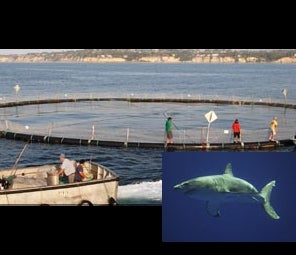 Six weeks ago, the Monterey Bay Aquarium released a young white shark into the ocean, and the swimmer has already cruised down the coast to the waters off Mexico.

The shark, which spent 162 days at the aquarium after it was accidentally caught by a local fisherman, is the first to carry two different tracking tags.

One of the tags records the water temperatures he swims through and depths he hits. This one will pop off on July 2nd, float to the surface, transmit its data via satellite, and enable scientists to see roughly what the shark has been up to. The other tag, called a Smart Position-Only Tag, transmits its position when the shark’s dorsal fin breaks the surface.

You can follow the predator here. Already scientists are impressed with how fast it swam south. “It’s another reminder of just how little we know about what these animals do in the wild,” said one MBARI scientist.