Threads for a Sunny Day

Thanks to inkjet printing, clothes embedded with solar cells are just around the corner 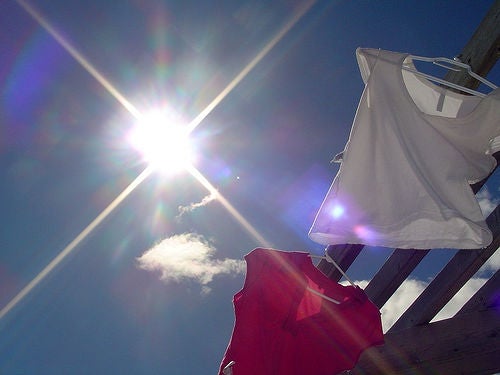 Back to the Future II was a bit of a disappointment in the face of the original. Granted, it was hamstrung by the throw-away ending of the first, but it did have that brilliant opening sequence with the hoverboards. How much did you want a hoverboard after seeing that? Not to mention, the computerized, self-drying jacket Marty puts on to blend in. The stuff of fantasy, right? At least for the latter, not for much longer.

The traditional components in solar panels—silicon and glass—made them rigid and heavy, limiting their use to a narrow range of applications. But the recent advent of inkjet printing on flexible mylar has given manufacturers the ability to use solar cells in ways previously not possible.

Fujitsu Siemens is reportedly only a year away from bringing clothes with solar cells woven into the fabric to market. It’ll be akin to wearing a solar panel into which you can plug your iPod or cellphone when you’re away from the house and need a charge. Or like the popular Solio handheld solar charger, only incorporated into the back of your shirt.

Of course, you’re going to need a lot of bright sun to get the most out of them. Typical silicon cells operate at around 18 percent efficiency, whereas the mylar cells top out at 5 percent. In other words, it might be a while before they hit the racks in, say, the Pacific Northwest.