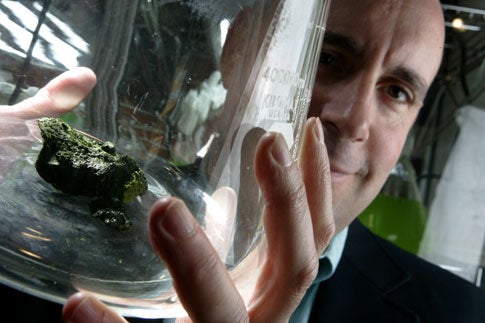 It could slow carbon dioxide emissions, power cars and jets, and replace petroleum altogether. Pond scum or green slime–whatever you want to call it–algae is the next great hope in the world of environmental startups.

In the natural world, algae is fairly effective at creating large quantities of oil, but turning the byproducts into biodiesel remains a difficult task. Nevertheless, the promise and business potential of an ultra-green fuel has spurned dozens of startups around the world. While their tactics for growth and extraction differ, all are focused on solving the problems associated with turning algae’s oily output into relatively inexpensive, useable fuel. And they share the same ultimate goal, some going so far as to predict commercial-scale production within three years.

Via: The Mercury News.