When it comes to motivating people to cooperate for the greater good, punishment and shame tend to work best in democratic societies 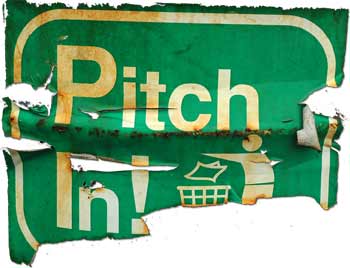 The unsettling prospects of climate change seem to be inspiring a flurry of research on the innate ability of humans to cooperate for the common good. In my last post, I described a clever game by German scientists that found that freeloading impedes cooperation among a group of individuals chipping in to prevent a global warming disaster. (Think G8 summit.) And in the latest issue of Science, economists announced that the punishment of people who don’t contribute varies markedly among countries. In fact, in some societies punishing freeloaders can backfire, causing the freeloaders to retaliate against the punishers. This, the scientists concluded, can stifle collaboration even further.

The international study, which was led by researchers from the University of Nottingham, presented a similar game where players collectively built a pool of cash to benefit the group. This setup is designed to mimic real-world scenarios where cooperation leads to a beneficial outcome for the group but is jeopardized by selfish incentives to ride free on others’ contributions. Examples: taxes, recycling, tackling climate change, voting. The economists found that players from each of the 16 countries punished freeloaders for their transgressions by reducing their earnings.

In more democratic countries like Denmark, Switzerland, the U.S., and yes, Germany, freeloaders who were punished became quickly remorseful and the group became more collaborative as a result. But in more authoritarian nations like Greece, Oman, Russia, and Saudi Arabia, freeloaders often retaliated against their punishers and cooperation broke down. “Our results show that punishment opportunities are socially beneficial only if complemented by strong social norms of cooperation,” the authors wrote.

Why would a group punish its punishers? “One plausible reason,” the authors say, “is that people might not accept punishment and therefore seek revenge. Revenge is a “human universal” and part of a culture of honor in many societies.”

Humans have evolved complex abilities to work together—it’s the very foundation of our social networks. For organized groups to succeed, individuals must repress (at least some) selfish acts. But as the Nottingham study emphasizes, the nuances of our different social systems can go far to encourage—or hamper—our species’ ability to play nicely with others.

Flaking out can be tempting, and opportunities to free-ride on others’ contributions to society abound. As our species sinks deeper into global environmental quagmires, it’ll be interesting to see if scientists can assess whether higher ecological stakes are inspiring more people to pull their own weight.

This is the second post in our Future Human_ series, which covers the prospects of_ Homo sapiens_ and the future of humanity._
_
Check out earlier posts here, where you can also subscribe to an RSS feed._