Future Human: Gambling on the Planet

In the game of avoiding a global warming disaster, only half of us are in it to win it 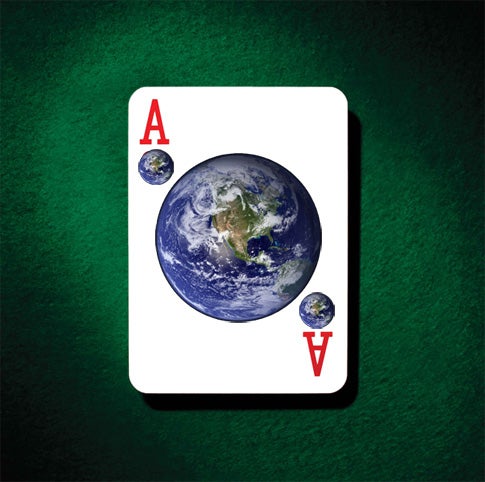 Welcome to the inaugural post of Future Human_: Covering the prospects of_ Homo sapiens_ and the future of humanity._
_
You can follow subsequent postings here, where you can also subscribe to an RSS feed._

If we were assured that climate change would doom the planet’s future, we’d all chip in to help stop it, right? Well, maybe not. An interesting forecast from researchers at Germany’s Max Planck Institute contends that humans have a fifty-fifty shot of cooperating on climate for the benefit of the common good.

In a recent PNAS paper, they detail the results of a climate-change game they devised to test an age-old social dilemma dubbed “the Tragedy of the Commons” by ecologist Garrett Hardin in 1968. The tragedy arises when a shared resource (such as the planet) benefits the individual yet is doomed when too many individuals exploit it.

In the game, undergraduates were given 40 euros apiece and assembled in groups of six. Each group’s goal was to amass just 120 euros in a computerized “climate kitty” through successive individual contributions. Each player was anonymous but could see how much others were contributing.

The researchers then engineered a tradeoff for players: If the group met the sum, climate change would be averted and humanity saved, and each player would be able to pocket whatever money he or she didn’t invest. However, if the sum wasn’t met, not only was the planet lost, but there was a 90 percent certainty that everyone’s pocket money disappeared. Lower-risk versions of the game also tested this certainty at 50 percent and 10 percent.

The results? Half of the groups managed to work together to protect both the environment and their wallets. The other half came close but wound up with the worst possible outcome—no planet, no cash. Yet this result occurred only in the highest-risk (90 percent) version of the game. When the risk of loss was reduced, cooperation was virtually nil.

“We cannot rely on people to always behave rationally,” the researchers concluded. Too many players, they found, were free riders: they relied on altruists to invest in climate, and walked away scot-free. It’s interesting to consider this dilemma in the context of a political summit on climate where each country stands to lose economically in the short-term. But cooperation among the 6.65 billion people on Earth is monumentally more daunting. It makes me wonder: Is our species evolutionarily built to win this game?