Factory Farming and its Dire Consequences 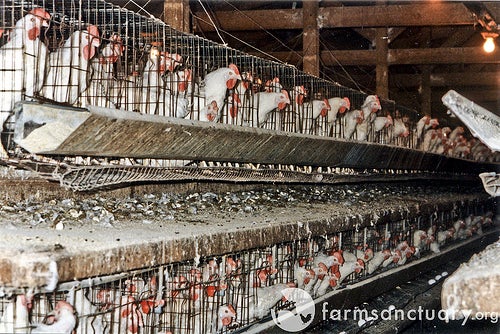 One of the dire consequences of factory farming is that it encourages the spread of disease due to the close quarters in which the animals live. That’s why they’re fed antibiotics and other medicines when they aren’t sick. This overuse of antibiotics, while beneficial to the flocks and herds in the short term, leads to stronger and more drug-resistant bacteria in the long term. The effect has been widely reported by popular authors like Michael Pollan and Eric Schlosser. What we haven’t heard much about are how viruses can thrive in this environment.

Ian York, an immunologist at Michigan State University, has this week written a story about chicken infected with Marek’s Disease Virus (MDV). The virus was a relatively minor nuisance before industrial scale farming operations brought large flocks of chickens together. Once the disease took hold, a vaccine was developed, but the virus managed to evolve and become more virulent until the vaccine was ineffective. This cycle has happened repeatedly over the past fifty years.

What is most interesting about MDV is the vaccines to combat it have likely contributed to the virus’s strengthening because none of them rendered the virus sterile. While the vaccines were effective at preventing the disease MDV causes, they were not effective at preventing transmission from bird to bird. The larger point York makes is that this may be just what the virus wants—he theorizes that viruses aren’t interested in evolving toward greater virulence but rather toward improved transmission.

That’s especially bad news in the face of the industry’s current eye toward cloning and genetic homogeny in the name of building a more uniform steak or fillet. Improved transmission among a diverse population is one thing, but among a homogeneous population is certain to lead to ruin.